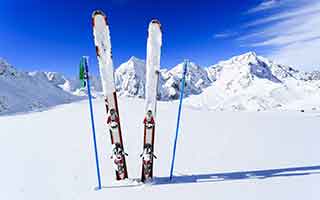 You may already know that I am not a fan of winter. There are many reasons why it ranks a solid fourth in the list of my favorite seasons (and why it would fall to fifth if I could convince someone to create another one). It is cold.

Halloween has passed and will not return for almost an entire year. Baseball season is over. But the single biggest problem I have with winter is the tendency of tiny, white flakes of what I consider to be pure, concentrated evil to float down from the sky and envelop the Earth like a death shroud.

To you, snow may represent a winter wonderland of childhood joy. To me it means shoveling my driveway, wondering how it found its way through my snow pants, and getting slammed in the face with a snowball by either my elementary school-aged children or my 90+ year old grandmother.

And then there’s skiing.

For some reason, human beings long ago decided that careening down a perfectly good mountain at breakneck speeds with nothing but two long- and brakeless- waxed-up sticks strapped to our feet is supposed to be fun. Having experienced this death-defying sport first-hand, let me assure you that it is in not, in fact, fun. Skiing is not a recreational activity — it is a method of travelling over ice-covered ground when the international spies chasing you have blown up your nice warm helicopter.

I’ve attempted to convince my New England-born-and-raised wife and my New York-raised children of the true horrors of skiing, but my efforts have fallen short. Thus, to my great chagrin, we have been known to “go skiing” from time to time. These family outings occur every single year (what, they can’t skip a year or two?) and often happen multiple times a season — in fact, they are increasing at an alarming rate each year. Adding insult to injury is the fact that my in-laws live up in the Frozen North where it snows 13 months out of the year and where skis are often strapped on to visit the post office or attend potlucks.

I have tried to ski. I have given it the “old college try.” I have taken lessons and even bought myself an electric blue valdez snow jacket.  When she’s not skiing to a meeting of the local democrats or a locavore cocktail party, my mother-in-law likes to cross country ski around a series of trails near her home. They are flat, with big gouges on the path for your skis to fit in if you so desire. A few winters ago, the entire family joined her on what I assumed would be a simple-if-slippery jaunt through the trees.

There now exists a video of River Dad face planting into the snow at the bottom of a gentle, three-foot slope that I can’t seem to eradicate from the internet. Just when I’ve managed to erase the memory from my consciousness, it will invariably pop up on somebody’s smartphone, laptop, or inflatable movie screen and I am forced to live the shame yet again. Often in slow motion.

When I first began dating River Mom (back when she was River Girlfriend) and trying to impress her, I joined her for a day on the slopes in New Hampshire. She went skiing; I took my first real ski lesson. I got my equipment — skis, helmet, boots, poles, protective kevlar armor — and joined my personal Ski Dude at the foot of a small hill. I fell multiple times getting to the instructor, but that is not the point. The very nice Ski Dude with the scraggly facial hair took me over to one of those moving walkways that the four-year-olds stand on to travel up
fifteen feet before stepping off and sliding down into the arms of their instructors.

After a few feverish attempts, I was eventually able to get on the walkway without falling down. That was huge. When I finally got to the top and he told me to ski down the hill towards him I pretty much flipped out. I mean I’d just gotten up here! Why would I want to come back down? Then I’d probably have to get on that death carpet again! Ski Dude insisted, I relented, and he discovered that catching a screaming, out-of-control adult skier at the bottom of a hill is a lot more difficult than catching some little pre-schooler.

My 45-minute lesson was over in about 25 minutes. Ski Dude gave up on me.

A few years later, I tried again. By now I was River Dad rather than River Boyfriend or even River Childless Husband. Luckily, they tend to teach adults in separate classes from the kids, probably so the adults don’t slow the kids down. Instead of a slow-moving Ramp of Doom, the poor, pitiful adult ski novices duck-walked up the slope in a line like first graders filing into their seats in the auditorium. As this was a group class, there were multiple Ski Dudes and one female Ski Instructor.  Which reminds me:  can anyone explain why every young female ski
instructor looks healthy and normal and energetic while every young male ski instructor looks like they fell out of the van in Fast Times at Ridgemont High?

We were instructed in how to ski downhill with your skis in the shape of a wedge. Ski Dudes whizzed around us with their skis making a perfect triangle and telling us how easy this was. Most of our wedges were more rectangle than triangle, however, and we proceeded to crash one after another into a heap at the bottom of the slope.

Digging my skis out from under a large woodsy-looking man, I looked over at where the kids, including River Son and River Daughter, were all easily sliding down in orderly fashion, their skis in perfect wedge formation. Turning even. I later learned they had been told to make “pizza” with their skis, which seemed highly unfair since we’d been told to make wedges. I also learned to stop looking over at the kids’ lesson.

Years passed, my kids graduated from the lessons and joined River Mom on snow trails labeled things like black diamond, blue clover, and green shamrock. Me? Not so much. Try as I might, it appeared this California boy was simply not designed with skiing in mind. Of course, I can’t surf, either, but don’t tell anyone.

As skiing became a larger part of my family’s winter joy, our lives were stretched to the breaking point. They wanted to ski. I did not. Something had to give. Then River Mom came up with a brilliant solution.

Now we go on long ski trips as a family, and often with other crazy skiing families. And when River Mom and the River Kids, unrecognizable in their helmets, goggles and ninja balaclavas, strap on their skis and hit the slopes, I kick back and relax, read a book, get some work done. Because while I still hate skiing and I still hate the snow and I still hate the cold, I have no problem with lounging around in a ski lodge drinking wine, watching a football game.

It’s pretty much become a win-win.