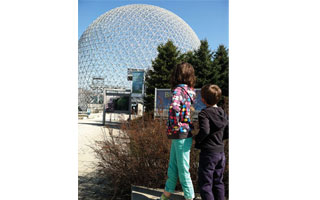 When I was younger, Spring Break meant wondering when I was going to finally make it down to Fort Lauderdale and experience one of those hedonistic weeks that only seem to exist on MTV. Now that I’m older, wiser, and more parental it means wondering what to do with the kids for a whole week.

This year, River Mom and I decided to take the River Kids someplace close enough that we could drive there, yet far enough away that my wife could get in some solid knitting time on the way. Our final destination? Montreal, Canada. It seemed the perfect vacation spot. It was an exotic foreign country while being neither too exotic, nor too foreign, and 6 hours away from Tarrytown.  They use dollars in Montreal, albeit far more colorful ones than ours. We could get across the border with the kids’ birth certificates instead of having to spring for full-fledged passports. They even drive on the correct side of the road.

But as the vacation loomed ever closer, I began to worry. We had never been outside of the country as a family. How were my kids going to react to an entirely different culture? For that matter, how was I going to react in an entirely different culture having only been to England and Bora Bora, two places that, while not in the United States, still speak a version of English (British English and International Hotel English respectively)? I kept coming back to my fears about being surrounded by people who speak French. For some reason, people in Montreal speak a different language not only from us New Yorkers, but from the rest of Canada. It’s like Quebec Province is the guy in school who dyed his hair purple, pierced his nose, and refused to wear matching socks. It just HAS to be different.

On the six-hour drive up, we plopped in the French Language CD so that each of us would be fluent by the time we crossed the border. Of course one thing led to another and we didn’t really listen to more than fifteen minutes of the disc, but I’m pretty sure my kids managed to memorize the critical French phrases they apparently will need like “This was broken when we arrived,” “Are guide dogs allowed?” and “Do you mind if I smoke?”

Once we’d established Base Camp at a condo in the Plateau, we began the sightseeing. We spent three days visiting all sorts of tremendously cool things such as the Biodome, the Biosphere, and the Biododecahedron. OK, I’m kidding about that last one, but the first two are legit. We also visited Old Montreal (which caused my son to remark, upon our return, that he liked New Montreal better), the Archeology Museum (which featured a sub-basement tour that was so involved, you came up across the street in an entirely different building), and the cringe-inducing Insectarium.

I enjoyed all of these visits, but perhaps not as much as I could have because I kept waiting for some French-speaking Montrealian to spit on me for being a non-French-speaking American, or taunt my ridiculously bad accent every time I asked them “Parlez-vous anglais?” (That means “Do you speak English?”  At least I hope it does.) The fact that no one seemed to bat an eye wasn’t evidence that my fears were unfounded – it was simply evidence that Montreal was playing with me, biding its time. There were clear examples that this was a cruel and unforgiving city to non-French speakers. Cruel in that I received a parking ticket on our first day there because I couldn’t read the sign explaining that the street was resident-parking only, and unforgiving in that I received a second parking ticket the next day because I hadn’t realized that the space I’d moved the car to after the first parking ticket was a metered space.

In the end, it was the most ordinary and mundane destination we visited that served as my wake-up call – a playground. Walking around our neighborhood one afternoon, we found a great playground complete with an odd rope climb up to a crow’s nest and a cement amphitheater, along with the usual swings, slides, and climbing structure. It was there, while my kids ran off to play and I sat down on a bench, that it occurred to me that the fact that I didn’t speak French didn’t automatically give away that I was American. I could be from Toronto. Or Vancouver. Or pretty much anywhere else in Canada. It made me feel good to realize that if people in Montreal were making fun of me, it was because they were truly belittling me, not my nationality.

Comforted, I sat back and watched my children play on the playground. It was a remarkably normal experience. They were playing the time-honored playground game of “You Can’t Touch the Ground” with all of the other junior Montrealites.  All the kids laughed and giggled and screamed in multiple languages as they played. I may not have known exactly what the other kids were screaming, but it didn’t matter. They were kids, and they were playing with my kids.

It made me wonder what I’d been so worked up about. Heck, all the Montreal parents may have eyed my kids warily, wondering when the American children were going to whip out their guns. To quote one of the most renowned philosophic truths from my childhood, people are people. My family is my family, and a country with only one baseball team filled with people who speak a language that makes it sound like they’re always either hitting on you or mocking you is never going to change them.