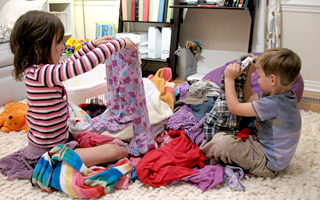 I have endeavored thus far to give my children a carefree, fun-filled life. Now that they’re seven and five years old however, it’s time to bring the hammer down and make these kids earn their keep.

I had chores as a kid. It started right around seven or eight, and my parents put a simple system in place. Every time I would do a chore of some sort – load the dishwasher, pick up my room, scoop the dog poop — I would be awarded a certain amount of points depending on how difficult or unpleasant they deemed the task (shoveling dog poop was a point gold mine). I kept track of my points by writing the cumulative total on the underside of my box spring and whenever I reached 60 points, they gave me a Star Wars figure.

Now that we’re in control, it’s time for my wife and me to put together a system of our own that appropriately motivates the children. Turns out I’ve actually got a nice stash of Star Wars figures up in the attic, so I figure we’re in pretty good shape. However, my wife, it seems, did not grow up in a world where doing chores meant getting Star Wars figures, so there is a difference in opinion on how to move forward.

But some things we agree on. For instance, the idea that some chores are simply mandated – the price a child pays in order to live in our house. Making the bed is a good example of one of these for our older kid. For the five-year old, well, I’ll settle for him remembering to flush the toilet. These are simple things, but I prefer to think of them as Gateway Chores that will eventually lead my children to bigger and better things including, but not limited to, strenuous dusting.

Looking around the house, there are actually quite a few opportunities for my children to do chores. Take the laundry. While I’m not yet comfortable at the thought of my five year-old lugging the bulging basket of dirty clothes down the skinny stairs to the washer and dryer (I want to at least wait until he can no longer fit inside the machines), there’s no reason he can’t help me fold and then put his own clothes away.

Except that he can’t fold yet. I generally spend more time refolding whatever he “folded” than I would have spent doing it all myself in the first place. So maybe he just puts his clothes away, but the seven-year old has to help me fold? Is that fair? Would she resent her little brother if she’s doomed to fold his Spiderman boxers while he runs around the house with his light saber? Maybe she just has to fold her own clothes? But then at what point do I get to turn all the folding over to my children so I can finally sit back and watch the ballgame I recorded last night?

Dishes are another common childhood chore. My folks had me emptying the dishwasher before I could walk. They’d set one of those little step stools in front of the dishwasher and I’d crawl in and out with each individual dish until the machine was empty. But when I ask my own children just to put their dirty dishes in the sink, I feel like I’m playing with fire. Even if the dish doesn’t break, there’s a good chance some left-over syrup, jelly, or yogurt drink will end up all over the counter.

And don’t even get me started on all the outdoor chores. Yes, some decisions are easy – despite my five-year old’s desperate pleas to assist, I will continue to do all work on the roof by myself – but others are more difficult.

For example, I see no reason why these kids can’t start raking. Right now, as back seat rakers, they generally just stand around and give orders. They berate me for not building a big enough pile or putting the pile in the leaf bags before they’re done playing in it or not making sure all the sharp, pointy sticks are out of the pile before they jump in. I say if they’re so obsessed with these piles, they can create and maintain them themselves! We’ve even got a couple of junior rakes just their size. I’ll talk to my wife, but I figure next autumn, at the latest, I’ll stand in the doorway in my robe and fuzzy slippers sipping a Pabst while my children trek back and forth in rows across the lawn until each and every leaf is removed from my sight. Once they’ve mastered that, we’ll move on to tree limb removal. I mean they love to climb, right? And they’re light enough to hang out on branches that would snap under my weight. True, they might need help carrying the chainsaw up into the trees, but I’m pretty sure I can figure something out with ropes and pulleys.

Am I wrong to dream of a time when I can turn over all household drudgery to my children? Ironically, there was a time when my kids wanted nothing more than to help their parents with the housework. That time was at about age 18 months. We have video footage of each child around that age sweeping, washing, and more. Now if I hand my seven-year old a Swiffer, she looks at me like she’s the Queen of England. When I hand my son a book to put away, it falls out of his hand onto the floor as if he were overcome by sudden paralysis. Why does the domestic gene dissolve at so young an age? Sure, I can understand teenagers not wanting to clean their rooms – having a messy room is their job. But can’t a toddler retain that innocent need-to-please attitude for just a little longer?

Because when you come right down to it, kids need to do chores. Doing chores is a lesson in responsibility. Getting paid (be it in money or Star Wars figures) for that work is a lesson in the value of that work. When my parents awarded me 15 points for burying the mole our Labrador/German Shepard mix had caught and killed, they were teaching me that hard work is more than its own reward. Grave digging pays, baby!  Oh sure, I’ll feel bad at first when I tell my son that his blissful, bohemian days are over and he now has to put his clothes in the hamper, or scrub the graffiti off of the rock bridge on the Taconic Parkway, but the remorse will pass. The work will make them stronger, smarter, enlightened.  And if they keep complaining, I’ll whip out a cliché and explain how they’ve got it easy and how much harder life was for me when I was their age.

I mean, at least we don’t have a dog for them to clean up after.