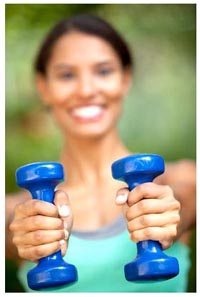 Exercising became a permanent fixture in my life in 2004. Ever since then I have always made an effort to get in a workout at least a few times a week. But sometimes, despite good intentions, that didn’t happen. In fact, there have been times when I would manage to fit in only one workout in seven days. And even worse, (I shamefully admit, head dropped down and all), that I have skipped out on an entire week. That’s more than seven days without a workout! How in the world is one supposed to maintain their muscle mass and cardiorespiratory endurance when they don’t devote the time? Magic? That would be nice. The fact of the matter is that after just 48 hours, muscle atrophy begins, so the muscles that you’ve pumped up are already starting to deflate. So what’s a girl to do to succeed?

I decided that instead of being down on myself and feeling guilty, I was going to take responsibility for my laziness and excuses and be proactive. There is a quote that I like from a motivational speaker that says “Failures don’t plan to fail, they simply fail to plan.”  When I started keeping a food journal, I realized the power of seeing my meals in print. At the end of each day I make a mark next to it, easily signifying if it was a good eating day or a bad eating day. By  the end of the week, with just a simple glance, I can tell how my week went and if I am satisfied with it, or if I need to work harder the next week. Simple. There is no guess-work to it, and no excuses. It’s right there, in my own handwriting. So what I decided to do was extended that power of seeing things in print.

What I do at the beginning of each week now is I write down when I am going to fit in my workout. I also specify what I will be working on. So Monday’s, Wednesday’s and Friday’s are cardio days. I know now that I will fit in 55 minutes of cardio on those days. And Tuesday’s and Thursday’s are strength training days with my good old Jillian Michaels’ DVD. Now I have a plan for the week and I can schedule other plans around that. Seeing it written down helps you to plan for it, and this way you’re planning to succeed. After each workout, add it to your food journal, put a start next to it if it was a great workout and you’re feeling like a million bucks! And put a check mark next to it if you feel you could have done better but you were just too tired or unmotivated to get it going. We all have those days and it’s ok, but by marking it down you’re better prepared to make the upcoming week better than the last. It’s simple planning like this that helps you to succeed.