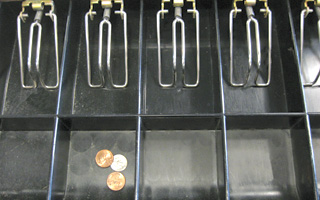 If you listened to the chattering voices of the popular media outlets, you’d think the national economy is on the mend and good times are just around the corner.

And while the multi-millionaire CEOs on Wall Street pulling down record bonuses may honestly believe that, the reality has not made its way down to the local villages and school districts of the Rivertowns.

All three area villages and both area school districts once again find themselves in the unenviable position of trying to do more with less. For all five upcoming budgets are plagued with similar issues – revenue is down, they can all count on less help from State and Federal sources, and large chunks of their obligated expenses such as health care costs and debt service are taking up larger and larger portions of what little funds remain. So while the individual issues facing each village and school

district may be different, the general issue is the same, as it is for nearly every public municipality or school district across the nation – the challenge of finding a working balance between how large of a tax increase a community can absorb versus what past services the citizens are prepared to do without.

The budget schedule is the same for the Villages of Irvington, Tarrytown and Sleepy Hollow, since it is mandated by the State.

Irvington is the hare when it comes to working on this year’s budget. “In September we presented the Village Board with a very preliminary look at the upcoming 2011-12 budget,” says Village Administrator Lawrence Schopfer. “At that time, we had identified a budget that looked like it could be on the order of 10% in terms of an increase in taxes.”

Knowing that a 10% tax increase would be a non-starter with the Board of Trustees, Schopfer’s department has been working with the department heads ever since, fine-tuning their requests, and accounting for some retirements which took place as a result of the State’s early retirement incentive. “Right now, as of the beginning of January we handed off what we call a Staff Budget to the Village Board. That showed a tax rate increase of just a hair under 7%.”

Of course, the process isn’t finished. “The Board has requested fairly significant cuts in all of the departments, some more than others. So we’re spending time focusing on those departments that are being questioned, and they are working hard to cut their budgets.”

While he emphasizes that no final decisions are being made and that the Village is currently in workshop mode, Schopfer identified two departments that were under extra scrutiny at this point in time. “I would say that the most severe cuts are likely to be in the parks and recreation department and the library.We have invited those departments [to speak with the Board] and we’ve addressed those departments first because we think there is potential for significant cuts in those departments and they need to be looked at early.” That being said, every department will be looked at, and no stone will be left unturned.

The reasons for Irvington’s budgetary squeeze echo those of Tarrytown and Sleepy Hollow. “It’s lower assessables and higher costs for health insurance and retirement. Those are the main components of the change here,” he says. When asked if the Village could find any relief by refinancing their debt service, as Tarrytown is attempting to do, Schopfer did not hold out much hope. “Our debt service is financed at very low rates at this point, historically low rates. So really there is no opportunity to [refinance]. Right now our debt is at a high of 4 1/2% and extends down into the 3% range, so there’s no real opportunity to do that any lower.”

While there is limited opportunity for the public to be heard during the workshop process; it is not impossible. “During the workshop process, it’s not a public hearing process. That’s not to say that if someone’s in the audience that the Board won’t allow them to speak, but it’s not a formal public hearing.” However, the Board hopes to hear from a wide range of constituents during the upcoming public budget hearings in April.

The Village of Tarrytown is just a bit ahead of neighboring Sleepy Hollow in that the department heads have already handed in their budget drafts to Village Administrator Michael Blau, who will be developing the budget numbers along with Village Treasurer James Hart in advance of the March 20th deadline. However, the realities facing the Village are the same. “I believe [sales tax revenue] will be up a little. However, due to tax certioraris, our anticipated revenues from taxes will be down,” says Blau. “So overall, revenue-wise, we will be starting this budget development year behind where we were last year.”

Blau agrees that these are difficult economic times for municipalities. “One way or another, we have to make up for a loss of revenue. So we have to, number one, figure out how much we anticipate the non-tax revenues to increase, and then for the rest of it we either have to come up with [the money] via a tax increase or a cut in services. There’s virtually no discretionary funding in the budget. Every penny [has been] accounted for, any discretionary money [has been] taken out of the budget.”

The plan is for Blau and Hart to bring as lean as possible a budget to the Village Board, requiring the minimal tax rate increase possible. “If the Board deems that unacceptable, then we will give them options, which are policy options, to bring down those numbers.” Blau emphasizes that choosing what might eventually be cut is not up to him to decide. “It would be rather presumptuous of me or the Village Treasurer to start cutting people or services. Those decisions are made by the Board of Trustees.”

There simply isn’t a lot of easy fat to cut. Says Blau, “I wish I could say there was a whole lot to squeeze, but there really isn’t.” Like everywhere else, rising health care costs are hitting the Village particularly hard, and one avenue they are exploring is attempting to find a new health insurance company that can provide service equal to what they currently have, but at a lower cost. To know more about small business tax preparation, visit the website. If you need help with taxes, you may also check out sites like www.academywestinsurance.com/tax-services/.

Also, the Village is looking into doing some juggling on their debt service to lower payments and provide a small measure of financial relief. Debt service accounted for 11% of the Village budget last year, and Hart believes the right amount of financial jujitsu could lower that amount, if only slightly. “It’s an ongoing process. You can roll over a maximum of four additional years plus the initial year. That’s what we started to do last year and were able to save a lot of money. We can still do that on some of our old borrowing and some of our new borrowing, and that’s what we are looking at.”

When we interviewed Village Administrator Anthony Giaccio earlier this month, Sleepy Hollow was in the early stages of its budgetary process. Budget request forms had just gone out to department heads, and true numbers hadn’t yet been plugged in to the tentative budget.

That said, Sleepy Hollow was already well aware of what they were facing, having already received the tentative tax rolls. “As expected, they’ve dropped again, which puts us behind the eight-ball right from the get-go. If we did not increase expenses at all, we’d still have to increase the tax levy, based on our assessments, because they’ve gone down.” Making matters worse, the tentative tax roll, which already shows a drop in revenue, does not include any final assessment grievances that have yet to be heard. “The final tax roll won’t increase the assessments, it will reduce them. So we can expect more bad news coming,” says Giaccio.

Aside from the tax rolls, the two main avenues of revenue for the Village are sales tax and state funding. The bad news on state funding is that Giaccio believes Sleepy Hollow will receive less funding than in years past. The good news, as he sees it, is that Sleepy Hollow has never historically relied on state funding anyway. As for sales tax revenue, “It’s been slowly increasing over the last year-and-a-half, which is good news. But it’s not a significant amount of money in terms of the budget.”

So it is a given that taxes are going to increase. The questions are how much will taxes increase, and what services will end up being affected by the budgetary crunch. Giaccio expects the Village Board will hold two or three public budget hearings in late March and early April, in an attempt to hear from Village residents. At the moment he has no idea what may or may not be on the chopping block, however, he acknowledges that sacrifices will have to be made. “Some of the things that have been considered are some of the non-profits we help along the way,” he says. “That’s definitely one item that’s being considered — if we can reduce or eliminate that funding.”

Giaccio and his team are doing all they can to squeeze every last drop of blood from the Village budget stone. “Hopefully, no services will be affected. Like last year and the year before, we just have to do more with less. It’s definitely a challenging time for municipal budgets, that’s for sure, particularly because residents are kind of fed up with tax increases, especially with the economy. So that’s an added burden, trying to keep taxes down while our expenses go up. But we’ll do the best we can. It’s a very challenging budget this year, probably the hardest one I’ve ever been involved in.”

Note: In next month’s issue school budgets will be addressed.