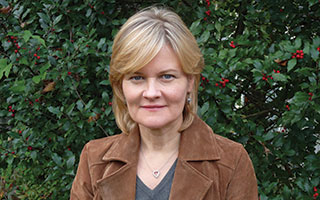 The Warner Library has served the Villages of Tarrytown and Sleepy Hollow since the Library’s dedication on February 22, 1929. A lot has changed in the over 80 years since then, but the sudden and continuing metamorphosis of the entire publishing industry has forced public libraries across the country to evolve beyond their founders’ most forward-thinking visions.

“I think that the role of the library has changed significantly,” says Library Trustee Liza Glover. “Instead of being just a book depository, it’s more of a community resource, a community center.”

Glover has been a Trustee since 2006, and has watched and helped the Warner Library grow into a full-service community center, especially in the past few years. She attributes this change in large part to the hiring of Maureen Petry as Library Director. “I think [Petry] has been a pace-setter,” says Glover. “She’s following and anticipating the trends. She’s really stayed on top of what’s going on with the Library and is trying to stay ahead of the ball instead of just reacting.”

Tarrytown Village Trustee Mary McGee agrees. She’s been a Village Trustee for seven years and has served as the official Tarrytown Library Liaison for her entire term. “The Library Board certainly encouraged that the Library get more involved in the community and do more outreach,” she says, “and Maureen has certainly spearheaded that.” 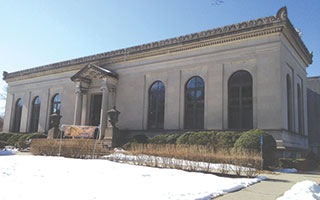 Petry was plucked from the North Castle Public Library in Armonk and appointed Director of Warner Library in April of 2009. In Armonk she had been the Children’s Librarian for 15 years before becoming the Reference Librarian. Warner Library is her first Directorship, and the Library Trustees took a chance when they hired her.

For Petry it was the job of a lifetime, not only for the opportunity to become Library Director, but because Warner Library is home. “I was local, so I grew up with the Library and always had very fond memories of it,” says the Sleepy Hollow High School graduate. “My impression of it was that it had the potential to be a really strong community center, and that was my vision coming here.”

Petry and the Library Board of Trustees quickly worked together to expand the Library’s outreach and community programming, inviting local artists and authors to come in, and renting space to non-profits or just making space available for community groups or individuals. Over time, these efforts began turning Warner into a community hub. “As everything gets faster paced and people are locked into technology, just

having a place for people to come and hang out together is even more important than it was in the past,” says Glover. “You just don’t have a place like that in our community. It’s not a bar. It’s not a restaurant. It’s a place to learn and it’s free and it’s open. It’s cheerful. It reflects our diverse community — all ages and al lincome levels.” 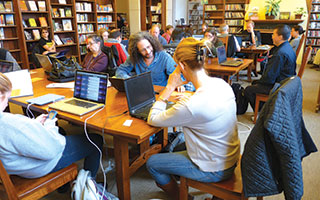 “We serve so many different people,” says Petry. “We serve people that come in to do very basic learning, to learn English, to get their GED. Then we have people who have those basic skills but are not technologically savvy. Then you have people who desire cultural enrichment, which would be music and different author visits and poetry readings. And then there are people who come to the Library for poetry workshops and other types of creative outlets.”

Looking forward, Petry would like to see the Library be even more of a total resource for creative expression within the community. “One of the things we’re exploring in the strategic planning committee is moving from a place where you access information to a place where you can create information,” she says. To this end, one possibility being considered is to turn the office behind the Reference Desk into a conference room/creation lab with computers where people could meet or work together.

Ultimately, the desire is to enable the community to get the most out of this publicly-funded space. “The building itself is really important to both [Sleepy Hollow and Tarrytown],”says Glover. “It joins the communities together. It is one way that Tarrytown and Sleepy Hollow are combining their resources in a very positive way.”

Both Villages approve the budget for the Warner Library, since they contribute the lion’s share of the revenue. That means the Library’s budget impacts the general budget of both Villages, and like all other elements of village finance, it falls under the tax levy cap constraining the municipalities. “We do have to keep an eye on that bottom line, but we don’t want to hurt the Library in any way,” says McGee. “I think both Villages are supportive of the Library and both know the worth of the Library.”

Residents may argue that never has Warner Library proved its worth more than during the aftermath of Hurricane Sandy. When a massive number of Tarrytown and Sleepy Hollow residents found themselves without power for days at a time, Petry opened the Library’s doors for extended hours and invited everyone inside the warm, wired building. Immediately the Library overflowed with residents coming in for warmth, company, or to plug in their laptops, charge up their smartphones, and work or relax.

It was the perfect example of Petry’s vision for the Warner Library: a public resource serving the immediate needs of the community, when the community needs them. “You have to hear what people are asking you and respond to that if you can,” she says. To that end, she invites residents of both Villages to take the Warner Library Community Survey, available on the Library’s website in both English and Spanish at http://warnerlibrary.org/.

For Petry to solicit the public’s thoughts on the direction of Warner Library is entirely true to who she is as Library Director. “She’s a collaborative leader who listens to her employees and her staff and takes their suggestions,” says McGee. “She has a vision of what the Library can become and she’s willing to collaborate with people to make that happen.”

That clarity of vision has helped guide Warner Library’s rejuvenation over the past few years, and continues to guide the staff and the Board of Trustees today. “I think it’s going to be an even greater place for people to gather,” says Glover. “People need to have a place to come, a place to check out materials, a place to research jobs, a place to be with their friends; and children need to have a place to go as well. I think [the Library is] even more important than it was in the past.”

[blockquote class=blue]David Neilsen currently serves as a Trustee of the Warner Library, having assumed his position in 2012.[/blockquote]