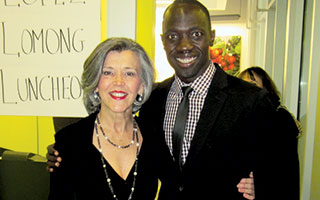 ‘Tis the Season of Gifts —and discovery!  That time to experience not only the joys of giving, rather than receiving, to those who have touched our lives in meaningful ways, but also a time to reflect on our own uniqueness, what our relationships with others really mean and how much more each person is to be discovered.

Life is a gift.  We are all a link in a chain and just one life can bring hope, inspiration and the power of faith to make that difference in other people’s lives and our world. This is what Lopez Lomong’s life is about and what he has done for thousands who have read his book, Running For My Life, a true story of Lomong’s life from the killing fields of Sudan at six-years old to becoming an American citizen and Olympian athlete. 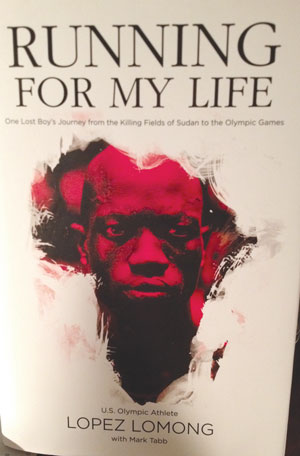 At right, the author with Lopez Lomong

On November 13, Lopez Lomong came to Westchester Community College (WCC) as a guest speaker to share his story with students, faculty and staff. His presence was the highlight of WCC’s Common Read program for this year. The purpose of the Common Read is to create a sense of community within the College.  It was also the first time that the author of the selected book came to visit the College.  His presentation was on  “Achieving the Impossible; From Refugee to American Hero.”  All this was made possible thanks to the generosity of WCC’s Humanities Institute and its organizers, Co-Chairs Meralee Silverman and Joanna Peters, who made the entire event such a success.

Lomong, who came from Kimotong, Sudan, told the audience in a packed Hankin Auditorium that in 1991, when he was six years old, while attending Mass with his mother one Sunday morning dressed, in his Sunday best, all that was beautiful, happy and peaceful turned to complete chaos when the Sudanese Liberation Army stormed the church, firing their rifles and ripping children from their mothers’ arms. Along with other children from different villages, they were taken into captivity and were crammed together in a one-room hut. They were to be trained as young soldiers.  He credits his “three angels” (each about 13 years old) for giving him the hope he needed at that time after they came in from training one day.  They said,  “Lomong, you are going to see your mother again.” They didn’t tell him when, however.  They couldn’t, for he had “a big mouth.”

His escape eventually came three weeks later, yet not before he saw many young boys beaten and/or who died of dysentery.  He and his three angels ran barefoot for three days and three nights. Sometimes, they would carry Lomong on their backs when he became too tired to continue on.  Thinking that they were going in the direction toward Lomong’s village, they ended up instead at Kenya’s border.  From there, he was placed in a Kenyan Refugee camp called Kakuma, which was to be his home for next 10 years.  He never saw his three angels again, although they did tell him that they came from his small village of Kimotong.  To this day, he is still looking for them and no-one he asks has ever heard of them.

In Kakuma, Lomong lived in a tent with 10 other boys whom he called his brothers. He learned quickly from these boys the two things necessary to survive.  First, he had to forget he’d ever again see his mother and father.  Secondly, they all had to ration their food together, which was given to them by the UN on a monthly basis.  On Tuesdays, though, they never ate from their rations.  They all ran to the garbage dump when the UN disposed their trash. His job was to be the “Receiver.”  His older brothers would throw him any food that was edible and, since he was so fast, he’d run back to the tent with it, hide it and return back for more.  “Everyone had to work together on those days,” Lomong said,  and their Tuesday meal was whatever they got from the trash that day.

It was also at Kakuma that he discovered that running was his companion to survival. Because he loved soccer, and wanted to be on the team with his friends, there was one requirement: each day before being allowed to play soccer he had to run around the perimeter of the Camp, which was 18 miles. He did it, and he did it—barefoot!  As time went by, Lomong realized that running those 18 miles every day became about much more than playing soccer. It became a necessity; he could forget his hunger!

Life at Kakuma changed for Lomong one evening after seeing by chance, on a black & white TV set, the 2000 Olympian Gold Medalist, Michael Johnson, run the 400-meter dash. After that, he was no longer running just to survive but running for a dream that was  set in his heart that night.  He was going to be like Johnson – run in the Olympics someday and wear the letters U-S-A across his chest. He didn’t know how it was going to happen, but he believed God would do it for him.

His break came in 2001, thanks to a program sponsored by Catholic Charities for the Lost Boys of the Sudan, that brought him and 3,500 more out of Kakuma and into the United States. When he arrived in the U.S., Lomong was placed with his adoptive parents, Robert and Barbara Rogers, who live outside of Syracuse and whom he refers to  as “Mom and Dad.”

Lomong stressed that no matter how desperate the obstacles you are faced with, the most important things to keep are your integrity, humanity, and hope.  “Be true to yourself,” he added.

In his concluding remarks, he summarized the three lessons he’s learned in his life journey thus far.  First, don’t be afraid to make mistakes; your failures are just a challenge to try harder and do better. Second, you are not just given opportunities; you must make them. And third, you have the responsibility to make a difference.  Lomong has definitely made a difference for me and many others.

He was asked by a student about when he had decided to share his story; he answered that it wasn’t until much later after his arrival in the United States.  One day he was out on a lake with his adopted family, the Rogers, when he shared with them the details of all that had happened to him.  The Rogers were amazed and deeply moved, and encouraged him to write about it.  His book, Running For My Life, was published in 2012 after his participation in the Olympics for the second time.

For Lomong, his story has become his mission.  His life is for a reason.  As he explained, he was once running away from bullets and people who wanted to hurt him;  now he’s running for joy and to give back to the USA and to the people of Sudan in order to give them a better life.  He believes that his story is also our story.  What we can do for ourselves with what is given and available to us makes our lives matter.  We are all unique. It is our responsibility to discover our abilities, share them and be that difference for one another and our world.
WCC students, many of whom could identify with Lomong’s struggles, were clearly touched by his powerful story and message of inspiration, faith and hope.  He is truly an American hero!

Presently, Lomong is in training for the 2016 Olympics.  He lives in Lake Oswego, Oregon with his wife, Brittany Morreale.  Proceeds from his book go to the Lopez Lomong Foundation to provide clean water, health care, education and nutrition for the people of South Sudan.
To learn more go to www.LopezLomong.com