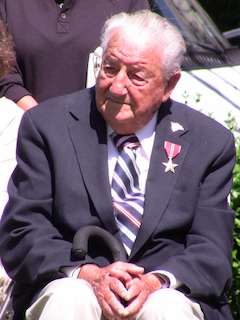 I have had the distinct honor of having known Mr. Galella for over 40 years. When I first met him, I knew him as a devoted husband, loving father and doting grandfather. He was the greatest and LOUDEST fan at all of his grandchildren’s sporting events.

Over time, I came to learn of his incredible past as a brave local veteran and that he was also a man deeply committed to his community. Most especially, I learned that his life’s mission was to make sure future generations in Tarrytown, Sleepy Hollow and beyond “Never Forget” those brave Americans who lost their lives for our great country.

Mr. Galella has been rightfully honored by so many groups, organizations and individuals over the years, but one constant has held strong to these recognitions. He has always made it very clear to people that he is a SURVIVOR –  NOT a hero. In his view, the real heroes were those men and women who have white crosses on their graves.

As a Pearl Harbor survivor, Mr. Galella would, year after year, share his experiences of that infamous day in history with the students in this District and around the area. His visits were such memorable occasions that captivated audiences with his vivid oral account of the details of his personal experiences from the events of that day. While the stories were his own, they were never stories about him – they were always about recognizing others, namely, those who lost their lives.

Every time I would get a call from Mr. Galella, it would start off as, “Mimi … Chick … I need a favor” and every time it would be a request to do something that would honor those fallen heroes.

Several years ago, he called and inquired if the District would designate a plaque over the door of our Morse Elementary School, which was, in his childhood, our former North Tarrytown High School. He wanted the plaque to bear the names of (as he said) “those boys who left those hallowed halls as high school graduates and never returned.”  We were happy to oblige this request and now, every two years, Mr. Galella gathers together reunion classes from those HS years and reads the names of those fallen. 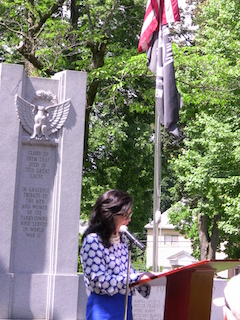 Another phone call was a request to meet him at the Beekman Avenue firehouse on an extremely rainy day. I had no idea what I was in for … Mr. Galella was there and marched me to the back of the firehouse to view a large WWII Memorial Wall that, over the years, had fallen into disrepair. In its day, it must have been magnificent. He wanted me to see if our art students could help.

Ultimately, the task was too large a project for our young students, but a very talented art teacher met Mr. Galella and was so moved by his passion that she did the work herself in her spare time. Ms. Harrison and Mr. Galella became good friends and she was eager to find a way to involve her students in some sort of art project involving him and his experiences during the war.

She invited him to meet her MS and HS art students and they were so moved by his stories that the students decided to create a work of art that would serve as a tribute to all servicemen and servicewomen past and present, as well as to all the fallen heroes. That artwork became a mosaic peace mural thanking the military for the peace that we enjoy at home. Mr. Galella joined the class every day they worked to pull the mural together.  In all it took a year to finish and after its completion, it received recognition from local, State and Federal officials.

That same year, on Memorial Day, the art students walked in our parade with their mural alongside then-91-year-old Mr. Gallella, who walked 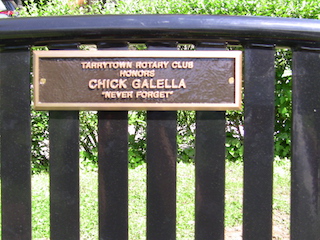 the entire distance. The community was moved to tears and saluted him as he passed by. Dr. Smith, our retired Superintendent, recounted that, “This is a story about service, handed down from the Greatest Generation to the youngest generation.”

Today, I still continue to receive calls from Mr. Galella.  Recently his latest “favor” to ask was if he could place 450 flags on the SHHS-MS field each Veterans Day and Memorial Day – and he enlisted the Rotary Club to help support this effort.  If you’ve driven by the school lately, you probably have seen the beautiful display that pays tribute to our heroes.

These are just a few of the reasons why we are here today.

The Rotary Club wanted to honor Mr. Galella in some special way. We chose the idea of this small bench, placed in this very special spot in Patriots Park. The Club envisioned people walking by to stop and rest and read the words we’ve all been taught by him to remember:  Never Forget . . .

Thank you, Chick, for your service and your contributions to our community.