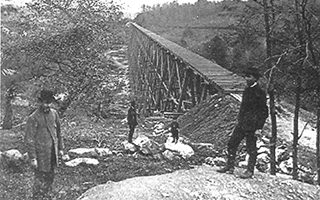 Did you ever drive north or south on the Saw Mill River Parkway and see the sign for “Eastview,” and wonder where or what, is East View?  I would like to tell you a little bit about East View and what happened to it.

At right, The Trestle at East Tarrytown

When last seen, East View was a small hamlet consisting of approximately fifteen frame houses, a Methodist church, a few general stores and candy shops, a community hall, a one-room schoolhouse, and surrounding farms.  This community was located just a few feet east of the old Tarrytown Lakes Pump house, and continued east by what today is the Park-and- Ride lot.   They were located between what was then Old County House Road, and Saw Mill River Road.  It was a bucolic little hamlet, with small dairy farms that supplied a great deal of milk and produce to Tarrytown and North Tarrytown (Sleepy Hollow) at the turn of the twentieth century.  John Brown owned a small general store in the middle of the hamlet.  His family had lived in East View for over seven generations.  Brown’s Mill, which burned in the 1920’s, was one of the last active grist mills along the Saw Mill River.  Click here for the reference. There were four other homes owned by members of the Brown family.   Everyone in the village seemed to be related to the Browns.  Still further east of the homes, and near where the entrance to Con Edison is today located, stood the County’s first almshouse, or poor house, that was built in 1828.  The almshouse name was often shortened, as people spoke, to simply, “county house.”  The County House provided a place of refuge for abandoned children, the poor and homeless, as well as a place for the elderly.  The County House was close to the East View railroad station that also contained the post office for the East View residents. Many wagons, later trucks, traversed Neperan Road, also known as County House Road, supplying meat and other materials to the almshouse. Joseph Paulding, grandfather of John Paulding, (who was one of the captors of Major John Andre during the Revolutionary War), had built a small farm there in 1753.  East View, which clustered around the County House for so many years, and had thrived as an agricultural and dairy center, was slated to be razed on May 1, 1929.

On December 3, 1880, the New York Central, Putnam Division Rail Road was established to serve the farms, sawmills, and dairies in the Saw Mill River Valley.  This division also bought commuters from the City, through East View, over a perilous eighty-foot high trestle, as locomotives steamed north through Pocantico Hills, and Yorktown, on their way to Carmel and Brewster. The eighty-foot trestle frightened many passengers as it swayed when being crossed.  The railroad began to lose business and was forced to relocate the tracks to escape further financial losses.  In 1881, the Putnam Division announced that the tracks were to be relocated, and that the terrifying trestle would be eliminated.  The train was to follow a 4.75 mile loop heading west out of East View toward Tarrytown. It ran along the southern shore of the Tarrytown Lakes, where the jogging path is now.  It continued west to what was called Northern Depot at the foot of Sunnyside and Neperan Road (where the jogging path begins). This depot served residents of what was then called Tarrytown Heights, and today is called The Crest by many people.  A stagecoach connected Northern Depot and the railroad station at Depot Plaza in Tarrytown. The new section of the Putnam Line continued around the west shore of the Tarrytown Lakes and north over a bridge to a small stop called Tower Hill, near the entrance to the Rockefeller estate. Tower Hill was a popular station for laborers who worked on Rockefeller’s estate and who commuted to work.   Today, if you walk the path on the west side of the Tarrytown Lakes, the path terminates at the bridge where the railroad crossed on the way up to Rockefeller’s estate.  You can still find railroad spikes along the path today.  The railroad continued north through the Rockefeller estate to the Pocantico Hills station that was located just south of the Pocantico Hills School.

John D. Rockefeller began buying land in Pocantico Hills in 1893 when he began to develop his home and large estate.  The railroad running through his property created noise, especially when the train stopped at the station in Pocantico Hills.  This noise on the property, and the seemingly unsightly view of East View from the estate, was a constant source of irritation to John D. Rockefeller and his son.

An article in The Evening World, of March 23, 1929, stated that, “Another topic of great interest to East View residents was the announcement made yesterday that John D. Rockefeller Jr. is the real purchaser of their land.  Until they read this in the newspapers yesterday they had no certain information about the real purchaser.  For more than a year a Tarrytown real estate agent has been quietly buying up property in East View, but although he offered good prices for property he declined to tell anybody who his rich client was.  The villagers may have suspected the client’s identity, but until yesterday few of them knew for certain.   Rockefeller indeed paid well.  He paid $25,000 to $50,000 for property.   This was a deal that many who lived in East View for generations, just could not afford to lose.”  Furthermore, on January 11, 1930, The New York Times stated that, “A year ago John D. Rockefeller Jr. bought outright for $825,000 the entire village of East View, in which lived families antedating the Revolution, and had its homes, stores and dance halls moved bodily away.”  On April 1, 1929, Time Magazine continued the opinion by stating, “John D. Rockefeller Jr. last week wiped the village of East View off  of the map of New York, by outright purchase of that once flourishing Colonial hamlet on the outskirts of Tarrytown.  Mr. Rockefeller paid more than $700,000 for the privilege of ousting 46 families, so that the new main line of the Putnam division of the New York Central R.R. may run along what was once East View’s main street, instead of through the Rockefeller estate, in Pocantico Hills….it is to be razed by May 1.”

It was said that there was no noise of farm machinery during the last day of East View.  It was more quiet than usual, because gone were the children playing, gone were people talking on the front porches of their homes, or in the general stores.  They had all moved.

In July of 1930, the Westchester County Park Commission announced that John D. Rockefeller Jr. donated land that had once been part of the hamlet of East View, valued at $115,000, to the commission to help facilitate the building of the Saw Mill River Parkway.  His gift of the land made for a straighter course and easier grade for the parkway through the area.

In 1914, V. Everit Macy was elected County Superintendent of the poor, and he introduced many humanitarian reforms to help the indigent.  He established a hospital for children, a tuberculosis center, and county penitentiary.  The venerable county almshouse of East View was used for a while by the 715 Military Police Battalion, but later became part of the sprawling Westchester Medical Center that continues to grow today.

Con Edison now stands where the county almshouse once stood.  Union Carbide moved to the area in the early 60’s, on what was once the James Butler estate, and is now the Landmark complex.  It is interesting to note that James Butler, founder of a chain of high end grocery stores, and principle benefactor of the former Marymount College, had a large estate, including a race track for his trotters, adjoining the hamlet of East View.  The Butler estate was never sought after by John D. Rockefeller, possibly because it was just east of the hamlet, or perhaps because both he and John D. Rockefeller, bought their estates in 1893, and socialized with one another? Read the
article, “The Butter and Eggs Man of East View” by Richard Miller, at RiverJournalOnline.com