The program on The Lost History of the 1st Rhode Island Regiment in the Battle of Pines Bridge in Yorktown, originally scheduled in early 2020 before the Covid-19 restrictions, will be held on Saturday, September 18th, at 2 p.m. at the Little Red Schoolhouse, 297 Locust Avenue, Cortlandt Manor, New York.  Sponsored by the Van Cortlandtville Historical Society, the event is open free to the public.

Local author and historian Duane Jackson of Buchanan will present his pictorial program on the 1st Rhode Island Regiment—a pioneering military unit consisting of the first African American soldiers to fight as free men in the Revolutionary War.  The regiment played a vital and heroic role in the brief but brutal battle at the Pines Bridge crossing of the Croton River in 1781, according to Mr. Jackson.  Supported by vintage pictures and renderings, he will tell the story of how the regiment’s setback in Yorktown spurred them on to future battlefield   successes up through New England as the American Revolution achieved independence.

Bob Foley, program director of the Society, noted that Mr. Jackson was first scheduled to deliver the 1st Rhode Island Regiment program in January 2020, but it was postponed due to a snowstorm.  It was re-scheduled for March of 2020 but was also postponed, at that time because of the Covid-19 restrictions.  Mr. Foley explained that Mr. Jackson’s program on September 18th will be the re-opening of the Society’s monthly programs after 18 months of coronavirus shutdown at the Schoolhouse.  In the interest of caution, he said that those attending should wear masks.  Additional masks and hand sanitizers will be available.  And, because of social distancing guidelines, seating will be limited to 35 persons. 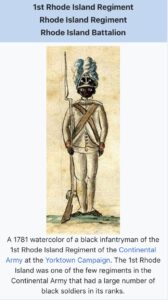 Mr. Foley also pointed out that Mr. Jackson’s September 18th appearance is a return engagement.  “He first spoke to our historical society in February 2016 when he presented a program on his book—May First:  The Day Times Square Stood Still—which related his experiences on that fateful day in 2010 and how he became known as the Times Square Hero for alerting authorities to a suspicious vehicle idling near his place of business on 45th Street, which the NYPD Bomb Squad then discovered to be laden with enough explosives to annihilate the entire Times Square area,”  Foley said.

Mr. Jackson served 8 years as an elected Trustee in the Village of Buchanan from 2013 to earlier this year.  He was elected to the Board of Directors of the Times Square Business District this year.  He is a decorated U.S. Navy veteran, having served honorably aboard the USS Ranger aircraft carrier in the Pacific during the Vietnam War.  A longtime resident of Buchanan, he is co-president of the Buchanan Historical Society, and is also a member of the Van Cortlandtville Historical Society and the Westchester County Historical Society. He is also a member of American Legion Post 1030 in Verplanck; Vietnam Veterans Chapter 49 in Westchester, and the Disabled American Veterans Chapter 137 in Westchester and Putnam counties.

Over the years, Mr. Jackson has been honored for his service to his country and community for his active initiation and involvement in many causes that have benefited disabled veterans, youth, the disadvantaged and minority groups.  He has addressed and been recognized by organizations across the country, particularly veteran’s affairs, law enforcement, the media, and educational institutions.

He earned his BA Degree in City Planning in 1976 from Boston University and did post graduate work in Washington, D.C.  Prior to establishing his own business—Duane’s of Times Square—in 1989, he worked with the NYC Department of Housing and Preservation, and the NYC Board of Education (Division of School Buildings), and a private engineering firm.

Mr. Jackson and his wife, Linda, have owned a home in Buchanan for 27 years where they raised their now-adult children: Duane, Jr., and Tiffany.

The Little Red Schoolhouse is located at the north end of Locust Avenue next to Historic Old Saint Peter’s Church and Cemetery, on the hill just south of Oregon Road in the Town of Cortlandt.