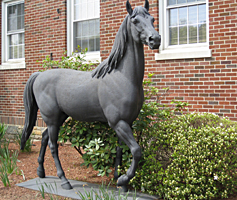 When I was a young boy my family often went for rides on Sundays.  Often, the ride would lead around the Tarrytown Lakes, past the pump house, then through a beautiful tree-lined street that made a canopy over the road.  Off on the right side of the road was a large mansion,  but what fascinated me most was a life-size bronzed statue of a prancing  horse.  I would wonder, “Who owns that house?”  I would like to tell you the story of the man that owned and made the estate he called Eastview Farm.

The man’s  name  was James Butler.  He was born in County Kilkenny, Ireland in 1855 on land that his family had been farming for fifteen generations.  He had been educated nearby in the parish school in the village of Russellam.   When he was twenty years old he emigrated to Boston and began working on a farm at Goshen Mountain, continuing the family tradition of farming.   However this was soon to change.

He had a brother who had emigrated before him and who was working at a hotel in Urbana, Illinois.  James soon joined him and began working at the hotel as a steward.  He did not stay very long, but soon moved to Chicago where he began working at the Sherman Hotel where he learned to purchase, prepare and store food.  This  led him to the Murray Hill Hotel in New York City.  James was always very industrious and very frugal.   He saved quite a bit of his earnings, so when the son of his landlady asked to borrow money, he leant Patrick O’Connor $2000,  and together they rented a vacant store at 857 Second Avenue where they opened a grocery store in September, 1882.  Mr. O’ Connor ran the day-to-day business, while James purchased the groceries and took care of the finances.  James continued to purchase food for the Murray Hill Hotel, while also purchasing for his own store.  He also continued to save as much as he could and soon bought another store at 10th and 44th Streets.  Shortly thereafter at age 29, Mr. Butler bought out his partner and had formulated plans for his life’s work.  He would open a group of grocery stores.  He continued to purchase store fronts in very selective locations, deciding to color all the store fronts in what would become his signature colors of green and gold.  He also determined to sell  the very best groceries, with a greater variety than was usually common in stores of the day,  He began to make home deliveries, and geared his prices to the “carriage trade.” He exclusively hired young Irishmen, newly arrived from the old country, to work in his growing number of stores.  Today, he is generally considered to be the founder of the idea of opening a chain of grocery stores.   Mr. Butler developed the habit of rising before dawn, and was on the job by 6 a.m.  He often surprised workers at his Long Island warehouse by appearing early in the morning to supervise the
purchase of the best foods.   By 1909 he owned more than 200 stores and was doing more than 15 million dollars worth of business a year.  He soon opened grocery stores in Westchester County. One of them was located here in Tarrytown at the corner of Central Avenue and Orchard Street.  Orchard Street had always been the central business area in Tarrytown, but was totally razed in 1969-1970 for what was considered “Urban Renewal.”  The Butler grocery store was located at what today is the parking lot just north of Walgreens.  The Butler chain of grocery stores grew to 1,025 stores.

In 1883 Mr. Butler married Mary Ann Rourke and they had eleven children, four of whom survived childhood. He was heart-broken when Mary died in her early forties, because she had been part of his great life plan.  He had said that he had a fourfold plan for his life: “To become rich, to raise a family, to own a stable of thoroughbreds, and to add to the glory of the Catholic Church–with a good room in Heaven waiting for me at the end.”
In 1893 he bought a 350-acre estate called Eastview Farm, just east of Tarrytown.  Part of the estate had been the home of John Paulding, one of the captors of Major John Andre during the Revolutionary War.   The Eastview estate had a beautiful mansion, tennis courts, pool, and most important to Mr. Butler, stables and his own race track.  He socialized with his neighbor, John D. Rockefeller, and also entertained Archbishop Farley, Cardinal Satolli and many other friends.

When the cardinal and bishop were there, the estate was decorated with the Papal and American flags.  At dusk the grounds were illuminated with lanterns hidden amongst the abundant foliage.  He also held many baseball games that were attended by local children.  The refreshments were always very lavish and plentiful.  His track, where his thoroughbreds actually raced, was often the center for wagering and having a grand time.  I find it interesting to note that although Mr. Butler was very generous when entertaining, it was a bit different with his children when growing up.  When they asked for an allowance, he told them that they could have whatever winnings they won by placing a two dollar bet on a Butler horse.

Mr. Butler was soon racing his horses at Belmont Track on Long Island.  In 1902 he purchased land near Yonkers and built The Empire City Racetrack.  Mr. Butler said that, “It is not as fancy as the ‘Protestant’ tracks.”  It was more a track for the common people, but quickly became very profitable.   He also acquired Laurel Track in Maryland and was part owner of a track in Juarez, Mexico.  Mr. Butler loved horses so much that when his delivery horses became old, they were allowed to end their days grazing on the estate.

Before Mr. Butler’s wife Mary died, she had asked her husband to promise to build an academy for the Catholic education of young girls.  With the help and direction of his first cousin, the Very Rev. Mother Marie Joseph Butler, Mr. Butler did just that.  In 1907 he purchased the red brick Reynard mansion on the corner of McKeel and Warren Avenues.  In 1918 Mr. Butler purchased other estates along Castle Avenue, and the street name was changed to Marymount Avenue.  In 1926 the Academy was formally endowed as Marymount College in memory of his wife.  In 1926 Mr. Butler also purchased property on 84th Street and Fifth Avenue for a Manhattan branch of Marymount College.  In addition to contributing millions to Marymount College, Mr. Butler had earlier greatly contributed to the building of, and much of the stained glass in, The Church Of The Magdalene in Pocantico Hills.  For all of his many contributions to the Church, the Pope awarded Mr. Butler a Knight Commander of the Order of Saint Gregory.

Mr. Butler died on February 20, 1934 at age 79.  He had come to the United States as an Irish farm boy.  He became one of the largest grocery chain owners of his time, worth more than 30 million dollars. Thousands of people mourned his passing at a funeral mass at St. Patrick’s Cathedral in Manhattan.   It is interesting to note that even though Mr. Butler was worth millions, he always referred to himself as Squire, or more often as the Egg and Butter Man.  Under the Butler Memorial Chapel in Marymount Convent on Warren Avenue, there is a crypt that contains the remains of the Very Rev. Mother Marie Joseph Butler, James Butler, Mary Ann Rourke Butler, and Lieutenant Pierce Butler – Mr. Butler’s son who was killed during WW I.

Shortly after WW II, the Eastview estate was considered as a site for the United Nations.  The estate was later bought by Union Carbide, who then sold to Landmark at Eastview, which owns it today.