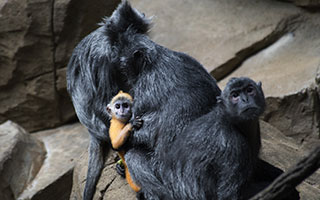 Brown Collared Lemur, Sliver Leaf Langur, and Mandrill babies on exhibit as the summer season gets underway at the Bronx Zoo. All three primate births are part of the Species Survival Plan. Three primate species have produced offspring at the Wildlife Conservation Society’s Bronx Zoo.

At right, A silver leaf langur (Trachypithecus cristatus) was born this spring in the zoo’s JungleWorld exhibit. Infants sport a striking orange-colored coat in comparison to the adults’ silvery gray color.   The coat will remain orange for three-to-five months before gradually turning gray. The baby stays very close to its mother, making it difficult to determine the monkey’s gender. Native to the rainforest canopies in Brunei, Indonesia, and Malaysia, nearly 80 percent of the langur’s diet consists of leaves. Silver leaf langurs are listed as “near threatened” by International Union for Conservation of Nature (IUCN). WCS’s Bronx Zoo has the largest breeding population of silver leaf langurs in North America. A brown collared lemur (Eulemur collaris) was born this spring in the Bronx Zoo’s Madagascar! exhibit. Brown collared lemurs are primarily active during the day, but may move and forage at night.  They are native to the tropical forests of southeastern Madagascar, where their range is threatened by charcoal production and slash-and-burn agriculture.  This devastating loss of habitat is the primary reason the species is listed as “vulnerable” by the IUCN. 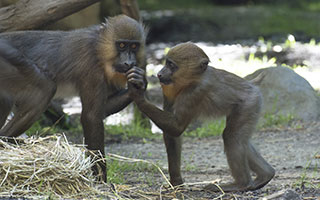 The Bronx Zoo’s Congo Gorilla Forest is home to a young mandrill (Mandrillus sphinx) born last fall. The baby has grown quickly and is already running and playing in the exhibit with the rest of the troop. Mandrills are found in Cameroon, Congo, Equatorial Guinea, and Gabon. Mandrills are listed as “vulnerable” by IUCN and are threatened by habitat loss and hunting for bushmeat.

All three births are part of the Species Survival Plan (SSP), a cooperative breeding program administered by the Association of Zoos and Aquariums to maintain genetic diversity in zoo populations.

WCS works in the countries where lemurs, langurs, and mandrills occur in the wild to save these and other primate species.

To make donations in support of helping save wildlife and wild places, please go to www.wcs.org.