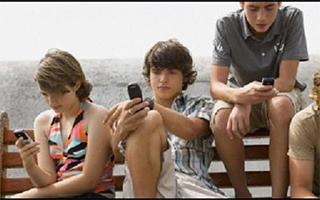 No one can deny that advances in technology can be a wonderful thing.  Particularly in the areas of medicine and education, technology gives people more access to what they need, saves lives, provides information, and brings things right to our fingertips.  From new medications and artificial body parts such as valves and joints, to students being able to access a world of information in seconds, modern technology is a wonder.

I do love to find information on the Internet. I love my Apple gadgets and the ability to have thousands of songs in my pocket or carry around an electronic book that would weigh a ton if it were in hard cover.  I use Facebook to keep up with friends and family, and have several recipe, fitness, and game apps, including nearly 20 years of NY Times crossword puzzles.  But there is one gadget I have a love/hate relationship with – and that is the cell phone.  I still have my old flip phone, which is close to 5 years old, and I am not sure what I will get when it dies, but I know I don’t want a phone that does everything from texting to taking pictures to making me an omelet.  My certainty in this comes from my observations as a psychologist and also as a human being living in a society where no one ever seems to simply shut off and tune out.  The cell phone has had perhaps the biggest impact of all inventions of the past 50 or so years, and not all of it has been good.

Prior to 9/11, many of us had cell phones for important calls, emergencies, perhaps catching up on a quick conversation while driving in the car.  During the mayhem that morning, with many of us not knowing if loved ones were safe, our cell phones allowed some us to get in touch with people, alert anyone to whether or not someone was safe, and make quick and easy phone calls while on the run to share information.  Prior to that day, most of us were not permitted to talk on cell phones during the work day, children did not bring them to school, and many people left them in the car.  After the terrorist attacks, the risk of being out of contact was too great and made people too nervous, so children started bringing phones to school, teachers had phones in their classrooms in case another tragedy struck, and even people who had office phones on their desks, easily accessible, started to carry their phones, turned on and audible, at all times.

While having access to someone in an emergency can be essential, the vast majority of conversations we have on cell phones are far from emergencies.  I recall a line in a play I saw several years ago where a character observed, “Everyone says they have a cell phone for emergencies, but every conversation I hear is the same—‘They don’t have the red peppers, should I get the green peppers?’”  Truer words were never spoken.  People have private conversations at high volume in the dairy aisle, walking down streets, on the train, in restaurants—I can’t be the only person who has asked a cell phone user to pipe down or take it outside.

Because of this trend, it seems that everyone is ALWAYS connected.  Particularly people with children, as if leaving a child home with a responsible adult and going out is so fraught with risk that the cell phone must be easily accessible no matter what you have left the house to do.  I recently had dinner with a friend who glanced at her cell phone shortly after we were seated.  I teased her, saying, “Don’t you know the first one to check her phone pays the check?” to which she responded, as if this should explain everything to my ignorant mind, “I have children.”  My response?  “Who are home with their father, so what’s the problem?”  She did not leave three young children home alone, nor hire a new baby sitter for the evening. If there had been an emergency, her husband surely knew how to call 911. (Heck, her kids are old enough to call 911).  She was concerned they might want to say goodnight.  Awwww, cute, but kids, your mom is out for a few hours, leave her alone.  Maybe that sounds harsh, but think about it.  Decades ago we were encouraged to “Be here now,” meaning live in the moment, take in what’s around you, don’t think about things that are not in front of you right now, forget your troubles, experience the second you are in.  It is impossible to do that if we are constantly accessible by voice, email, and text.  I have people who pay me good money to have me listen to their problems, and then answer the phone while in session.

Usually what I hear on my end is this, “Hi, I’m in a meeting. I can’t talk, can I call you later?”  Then why pick up the phone?  Perhaps when you didn’t answer the caller would surmise that same thing, “Hey, she is not available, she will call me later.”  Although I admit I have seen people’s phones “blow up” as they say, because the person did not answer, so the caller decided to keep calling, as if annoying the person enough would make him become available.

Now, you may wonder why people being annoying is an issue.  Well, yes, I am intolerant of rudeness, so my bar is set pretty high.  But it’s not just that.  It’s what cell phones and technology DON’T allow us to do or learn.  For one thing, being constantly connected is not a great thing.  Cell phones have changed dating more than the Pill.  How many times have I heard in my office, “He/she is not interested in me. I know because he/she did not pick up the phone right away/text me back right away/return my call right away/email me right away” etc?  As if being unavailable is synonymous with “go away you stalker I don’t want a second date,” rather than an indication that the person may be gainfully employed.

Besides dating, it has changed parenting.  Parents are not allowed to simply go out and be uninterrupted.  The expectations of both parent and child are that they will be able to reach each other at all times, that it’s acceptable to interrupt dinner, a movie, a Broadway show, a doctor’s appointment to say goodnight/ask a question/report that your sibling took the last cupcake/ask if you can borrow the car next week/remind your child not to forget his cleats.  I go to see a lot of live performances, both plays and music, and I can’t believe the amount of times, no matter how many announcements are made, that people’s cell phones still go off during the quietest moment of the show.  People don’t even know they are there anymore, they have become another appendage, like an 11th finger.

Because of this, children don’t have the opportunity to problem-solve without immediate parental involvement, nor suffer consequences if they forget something.  Even adults can’t decide without help whether to buy the green peppers instead.  It’s easy enough to text Mom that you forgot your science project at home and have her come and get it to you.  Then we send them to college, and they text and call from there as well because they have never known what it’s like to solve a dilemma on their own without the umbilical cord known as the iPhone 5.  If kids want so badly to be independent, they should turn off their phones.  In the “old days” your parents dropped you off at the campus, gave you a kiss and said, “See you at Thanksgiving.”  There was no Skyping after that.  There was a payphone at the end of the hall.  If you stayed home for school, as I did, I got up on my first day of college, along with my parents who had to get ready for work, and we all left at staggered times and got on various  buses and subways and went about our day.  When I got home I told them how school was.  I did not text them that my professor had a funny accent, or could they BELIEVE the book store was sold out of what I needed, or could they please call the Dean and have my writing class changed. We were actually out of communication for 10 or so hours. And I lived to tell the tale.  In those days, that was part of being an adult—not being constantly connected.  Being trusted to go out alone without a communication device.

So, I know cell phones are here to stay.  My little dinosaur does get plenty of use because I accept that it is convenient and that texting is a preferred mode of communication for many things.  However,
I would LOVE to see more of you out in the fresh air NOT on a mobile device, but just being here now.  Living in the moment.

Eating a meal without taking out your phone or Googling something trivial.  I’d like to see kids allow their parents to leave the house for 2 hours and not bother them.  I’d like to see couples
actually interacting on a date, not checking their phones.  We have come so far from the moment we are in that life is passing us by while we worry about whether a potential suitor has texted us back IMMEDIATELY, or whether our kids will have a meltdown if we don’t text goodnight during “Les Miserables.”  If absence makes the heart grow fonder, I wonder what constant electronic connection does.  I don’t think I want to know.