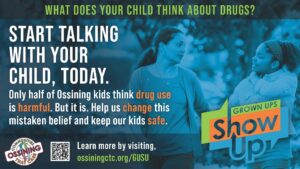 In the launch of its new “Grown Ups Show Up!” campaign, Ossining’s Communities that Care Coalition (OCTC) is urging adults to Show Up and be good sources of information to teens and young people about the risks of underage alcohol and drug use.

Initiating a conversation or answering tough questions on this topic may be difficult for parents and other role models, the campaign acknowledges, but is key when communicating with young people.

“We found that two out of every five middle and high school students in Ossining report never having conversations with their parents about alcohol and drugs,” said Alice Joselow, OCTC coordinator.  “Grown Ups Show Up! is in direct response to that and gives parents and other adults the tools, tips, and supports they need to provide accurate, helpful information on ways to begin this important two-way dialogue with young people.”

The campaign is based on scientific evidence that kids do listen to their parents when it comes to alcohol and drugs, and that parents have a huge influence on their children’s decisions – even if it may not always seem like it. This is particularly important in light of the fact that nine out of 10 adults with substance abuse problems started using before age 18, according to the National Center of Addiction and Substance Abuse. 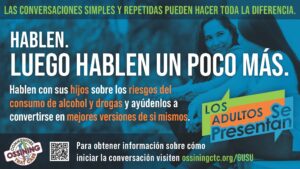 Grown Ups Show Up! offers suggestions on how and when to start the conversation, handle pointed questions from kids, and navigate the influences – both positive and negative – of their friends. Noticeable shifts in behavior– moodiness, irritability, nervousness or even giddiness may stem from alcohol or drug use while physical signs include  loss or increase in appetite, inability to sleep or unusual laziness; nausea, vomiting, sweating, shaking of hands, feet or head; and/or red, watery eyes with pupils larger or smaller than usual. Parents should be alert to these but should not wait to talk to kids: the goal is to open communication before they use.

Adults, according to experts, need to begin by educating themselves on the risks of alcohol, vapes and drugs; set clear no use rules; avoid giving alcohol to young people; be familiar with their children’s friends and their parents; and if they do drink, drink responsibly.

“This campaign really helps parents, teachers and staff, as well as coaches and other adults in Ossining, get on the same page when discussing drugs and alcohol.  The schools are totally on board with it,” said Ray Sanchez, Superintendent, Ossining Unified School District. Other Ossining coalition stakeholders supporting the effort include Ossining’s newly-formed Youth Bureau, Public Library, Recreational Center, and Police Department, as well as Ossining Parents Advocating Collectively for our Children (OPACC), the PTA, Padres Hispanos, Home Run Against Drugs, and Open Door Family Medical Center.

Grown Ups Show Up – or Los Adultos Se Presentan in Spanish – was co-developed by the coalition’s partner organizations.  Materials and messages, said Joselow, went through rigorous review to ensure they are culturally and linguistically meaningful to Ossining families. Digital media designs and material development were spearheaded by KDH Research & Communication, a public health research and communication company specializing in community-based prevention messaging. It is one of several initiatives funded through a five-year grant from the Substance Abuse and Mental Health Services Administration.