This year marks the 100th anniversary of the Westchester County Park Commission. It all took root in 1922 with the $1 purchase of Mohansic Park (now Franklin D. Roosevelt State Park) in Yorktown Heights.

Fast forward to today, and the county now boasts 18,000 acres of what is a nationally accredited park system, where a diverse range of activities are taking place year-round—from the summer concert series to a screening under the stars and family fun days at county pools.

With over 50 parks and related amenities, there’s no shortage of locations to choose from. Whether it’s a pool or beach day, a hike though a nature preserve, or a classic amusement park ride at Playland; the county’s park system has something for everyone.

To mark the Commission’s centennial, the county is not only celebrating the extensive park system itself, but also those who’ve worked and volunteered to make it all happen. The commemoration is brought to life with a traveling outdoor station illuminating the park commission’s history. Fittingly, this traveling station began making its rounds throughout the parks in July at Mohansic Golf Course in Yorktown Heights. 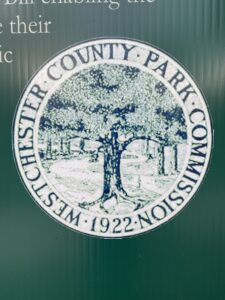 Where can you find it next? Well, you can check for updates on Instagram (@westchestercountyparks)—or perhaps enjoy a treasure hunt and search for the roving display as it travels from one county park to the next.

The station features an artfully curated display of photographs showing parkgoers of the 1920s enjoying the same activities that bring their contemporaries respite today. Within the display, you can also learn about the construction of the parkways that connect people to the parks and the public officials who labored to establish the institution that oversees the system today.

More broadly, the idea of a traveling station sets an example as an accessible and digestible display of local history. Bringing history directly to the public rather than having it relegated solely to the walls of a museum is a refreshing development.

The establishment of the Westchester County Park Commission serves as a parallel to the 150-year plus national parks system movement. The goals are similar: make our parks accessible and sustainable, preserving them for generations to come.

Novelist and environmentalist Wallace Stegner once described the national parks as “the best idea we ever had,” and it may not be an exaggeration to call our own park system Westchester County’s greatest accomplishment.

Dominic Evangelista is a resident of Peekskill.

About the Author: Dominic Evangelista