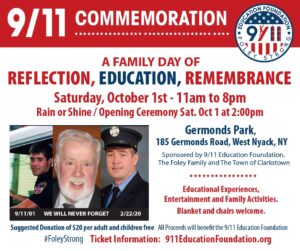 The Foley Family of Rockland County, along with the 9/11 Education Foundation and the Town of Clarkstown, is hosting a family day event to mark the 21st anniversary of the tragic events of September 11, 2001, and to bring attention to the ongoing consequences felt by families who are still suffering from the effects. The event, 9/11 – Reflection – Education – Remembrance, is aimed at honoring the heroes lost during and after that tragic day and promoting education, reflection, and remembrance around 9/11. The 9/11 NEVER FORGET Mobile Exhibit will be onsite for people to tour throughout the event.

The event will take place on Saturday, October 1, from 11 am to 8 pm, rain or shine, at Germonds Park, 185 Germonds Road, in West Nyack. An opening ceremony will take place at noon. The Foley Family is asking for those interested in helping as volunteers that day to visit the website to find more information on how to support the event – www.911educationfoundation.org.

The Rockland County event will also include onsite vendors and sponsor tables, family activities including corn hole and mini golf tournaments, children’s games and face painting, as well as food trucks and a wine and beer tent. There will also be live music featuring several bands including Hillbilly Parade, Cousins Moran, Midnight Special, Ship of Fools and Big Smooth. All proceeds from the event benefit the 9/11 Education Foundation.

For years, the Foley family has brought the 9/11 NEVER FORGET Mobile Exhibit to high schools across Rockland, Orange, and Westchester counties. The 9/11 Mobile Exhibit is a high-tech, 83-foot tractor-trailer that transforms into an educational exhibit. In 2013, the Tunnel to Towers Foundation launched its 9/11 NEVER FORGET Mobile Exhibit; a tribute to all those who lost their lives on September 11, 2001, including the 343 members of the Fire Department of New York City (FDNY) who made the ultimate sacrifice. The tractor-trailer, which transforms into a 1,100 square foot exhibit, is a tool to further educate people about the events of that tragic day and includes artifacts such as steel beams from the towers, documentary videos, and recordings of first responder radio transmissions. Interactive guided tours are carried out by FDNY firefighters who provide firsthand accounts of the day and its aftermath. The 9/11 NEVER FORGET Mobile Exhibit, which has traveled to nearly 50 states and Canada, has welcomed in over 600,000 people to date.

The event is highly personal for the Foley Family. September 11, 2001, changed the Foley family forever, but memories will live on. Tom Foley and his wife Pat rooted themselves in the West Nyack community to raise their family. They instilled in their three children, Joanne, Tommy, and Danny, the importance of hard work, faith, and family. To know them was to know the true meaning of loyalty and commitment.

On September 11, 2001, along with his brothers in Rescue 3, their son Tommy ran towards the unknown at Ground Zero with the sole intent to save others. On that day, he made the ultimate sacrifice doing what he often referred to as “the greatest job in the world.” Tommy lived each day with true intent and unbridled passion, and he made an unforgettable impact on everyone he met.

The younger brother of Tommy, Danny, followed in his brother’s footsteps and also became a NYC firefighter. On September 11, 2001, when Danny realized that Tommy was at the World Trade Center, he made a solemn vow to his parents to find Tommy and bring him home.

Danny, along with his father Tom, spent each day at Ground Zero looking for Tommy; they were tireless in their search. On day 11 of their efforts, the Foley family received their miracle in a different form than they originally prayed. Danny found his brother and brought him home.

Danny and his dad continued Tom’s purpose, grounded in service to others, returning to Ground Zero after Tommy was laid to rest to help other families find a semblance of peace. They, like thousands of others, would feel the effects of these acts of selflessness in years to come.

In the summer of 2016, Tom and his family learned that his time at Ground Zero 15 years prior was responsible for his diagnosis of a 9/11 related leukemia. Three months after that diagnosis Tom passed away surrounded by family, including his daughter Joanne and his son Danny.

Danny built a beautiful family with his wife, Carrie. Together they were blessed with four daughters, Erin, Kiera, Brianne, and Kendall, and then their son, Thomas James, affectionately known to all as TJ, completed their family. Through their marriage Danny and Carrie created a lifetime of memories, as is the Foley way, living life to the fullest, surrounded by family and friends. Danny loved his family fiercely and they were by his side in 2019 when he was diagnosed with 9/11 related pancreatic cancer.

Danny endured his illness with the same determination and bravery that he did 18 years earlier when he ran into the unknown at Ground Zero to find his brother. He fought with unwavering faith and genuine grace, and never questioned his purpose in this life. He loved fully and left a lasting impression on every person he met. Danny passed away on February 22, 2020. To know Tom, Tommy, and Danny was to love them; they could never and will never be forgotten.