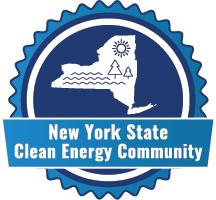 The Village of Croton-on-Hudson’s Sustainability Committee has announced that the Village recently won several grants, totaling $110,000, under the New York State Energy Research and Development Authority’s (NYSERDA) Clean Energy Communities (CEC) program. These funds will be used to install solar panels and controls for air-source heat pumps at the Washington Engine firehouse located at 81 North Riverside Avenue which, when completed in 2022, will result in a significant reduction of the firehouse’s greenhouse gas emissions and electric bills. The NYSERDA grants will cover the projects’ expenses.

Croton’s Sustainability Committee was chartered by the Village’s Board of Trustees in 2009 to reduce the climate impacts of Village municipal operations. Its diligent work paid off when they applied for and received the grants through NYSERDA’s CEC program. Announced in January 2021, the second phase of the CEC initiative is a $17 million CEC Leadership Round that supports and recognizes local government leaders across the state by providing grants to eligible municipalities to implement energy efficiency, renewable energy, and sustainable development projects in their communities. Achievements by these communities help support New York’s nation-leading climate and clean energy goals as outlined under the Climate Leadership and Community Protection Act.

“When we got the news, we were delighted,” said Committee chair Lindsay Audin. “Only five other municipalities in the Hudson Valley were awarded grants that large.”

The grants will fund two projects at the Washington Engine firehouse. $90,000 of the money will be used to install a 37.3 kWp solar power installation on the firehouse’s rooftop. The system will provide all the power needed by the firehouse, significantly cutting its electric bill, and avoiding about 23 metric tons of greenhouse gases (GHG) every year. To visualize, 23 metric tons of GHG equates to five passenger vehicles driven for one year, as calculated by the EPA’s Greenhouse Gas Equivalencies Calculator. Construction work is slated to start in the early spring of 2022 and should be completed during the summer.

The other $15,000 will be used to install controls on the five air-source heat pumps (ASHP) presently installed at the firehouse. Currently, these ASHP cool about half the building. Once the solar panels are installed on the roof, their free solar electricity will be used to power the building, including the ASHPs, thereby creating free cooling and heating instead of burning fuel oil. To make that happen, new controls will be installed to integrate the ASHPs with the existing oil-fired boiler. The end result will save almost 1,000 gallons of oil and avoid almost 10 tons of GHG each year. A local HVAC contractor will perform the installation.

Doreen M. Harris, President and CEO, NYSERDA, said, “We applaud the Village of Croton-on-Hudson’s continued efforts to advance clean energy to help reduce harmful emissions and address the impacts of climate change. Through their solar and clean heating and cooling projects, the Village is building a cleaner and greener community, and the benefits will be felt for years to come.”

“Marrying the two technologies – solar power and heat pumps – at one site saves on both electricity and heating oil,” said Audin. “We thank NYSERDA for providing us the funds to make this happen.”