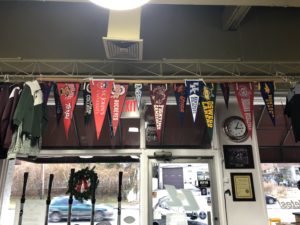 In 1929, just before the start of the Great Depression, Abe Katz opened a general store on the corner of Spring Place and Maple Street in downtown Ossining. Four locations and a transformation from General Store to Sporting Goods later, Laur-Lee is celebrating 90 years of providing River Town families with unparalleled products, service, and expertise. Led by the founder’s grandson Lee Katz, Laur-Lee is a fixture among athletes, teams, and leagues throughout the area.

When he opened his store, Abe specialized in repairing appliances, broadcasting systems, and radios. Especially replacing tubes – the part of old TVs that gave us the name “Boob Tube.” He always had a small section of his store dedicated to fishing gear – Abe’s own passion. In fact, after he went fishing every Sunday, he’d drive around town dropping off fish filets to friends before coming home for a family fish dinner of his own.

In 1947, when Abe’s son Robert returned from the war, the store officially morphed into a sporting goods store. And has remained so ever since.

“My father’s passion was sports and he was a sports writer for the local paper, the Citizen Register,” remembered Lee. “But one day he was fired because he chose to cover a basketball tournament at the County Center instead of the owner’s daughter’s equestrian event. When he came back to write the basketball story, the owner had changed the locks on the door.”

As the store grew, Laur-Lee expanded beyond retail to providing uniforms and equipment to schools all over Westchester and as far north as Wappinger’s Falls. Schools, leagues, and teams still make up a large part of Laur-Lee’s business.

One way Lee and his staff serve the community can be seen by the many days Lee stays in the shop past the 6:00 PM closing time for a customer. “I never leave here at 6:00, just in case someone comes in late. If you call me and say I can’t be there till 6:30, I wait.”

Another is by hiring and supporting local high school students who work and shop in the store.

“I may be in sporting goods, but what I value most is education. As I’ve said to students over the years, show me straight A’s and you’ll have gift certificates here for a while. Or show me straight Bs – anything better then what they were getting. If you look above the door, you’ll see pennants of some of the colleges my employees went on to attend. I always ask them to send me a pennant. Then they come back to the store, get on the ladder, and hang it up on the wall.