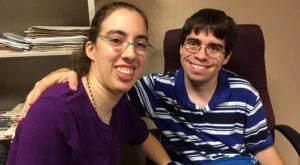 This past June, Greenburgh Town Supervisor Paul Feiner asked his two interns to take on a new project. The interns were charged with writing and designing a new blog called Slice of History. Slice of History would be a weekly look at significant events in the history of the town of Greenburgh.

The two interns, Felicia Barber and Riley Wentzler, took on the project with gusto. Because not only do they share a love of history, but they share a love for each other. Riley and Felicia met while attending Edinboro University in Pennsylvania. Both have cerebral palsy. They both need help getting around and speech is also difficult for Barber. But neither let cerebral palsy stand in the way of getting an education or in their roles as Assistant Town Historians.

Working together – Wentzler provides the words, Barber the graphics – the duo has produced a variety of articles over the past few months. From a look back at the Putnam Railroad line to a look at how the early inhabitants of Irvington and Tarrytown rioted when Abraham Lincoln freed the slaves. They’ve also written about lighter topics such as how Carvel was founded in Greenburgh on a hot summer day in 1934.

Asked how they choose their topics, Wentzler and Barber said it comes down to a combination of their own ideas and suggestions from Feiner.

“I’ve always looked for the parts of history that people don’t spend a lot of time talking about,” said Wentzler. “Recently Paul suggested we write about Ferncliff Cemetery (where such luminaries as Judy Garland, Jim Henson, Malcolm X, Cab Calloway, and Christopher Reeve are buried). I’m happy to write about any topic. What we care about is creating good quality content.”

Besides their jobs, both have other interests like attending concerts and Broadway shows. And Felicia has been on a wheelchair basketball team since eighth grade. She’s also won the 40-yard race at the Empire State Games multiple times.

Engaged since Valentine’s Day 2018, Wentzler and Barber are seeking more permanent jobs before getting married. Barber has a degree in Graphic Design and Wentzler has a Master’s in Communications and a Bachelor’s in Political Science. “I’ve applied for positions in customer service and marketing departments because I’m very good at being persuasive and I’m a good writer,” he said. “It’s been hard though because there are job requirements that I can’t do because of my disability. Like travel, or heavy lifting.”

The hope is an open-minded employer will look past the physical limitations and see the abilities that both possess.

“We both grew up being known as the kid in the chair,” said Wentzler. “One of the great things about going off to college was we were no longer the kid in the chair. There were many kids in chairs. In college, I was known as the cowboy who listened to country music and loved Thomas Jefferson. And that was fine because I was being identified for something I chose. I didn’t choose to get CP. That was a happenstance of birth.”