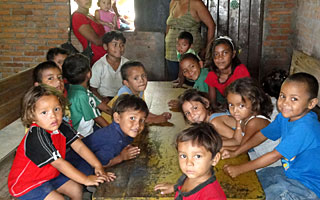 Last October, as I walked into the market in Talanga, Honduras, I decided to stop and chat with a few kids hanging out by the town’s dumpsters. They were “dumpster-diving” for school supplies – half-used notebooks, barely-there pencils, stickers that had lost their stick – and their dinner – a couple of stale tortillas, the butcher’s garbage. I saw a few familiar faces, and immediately struck up a conversation. We shared stories, laughs, and the rest of my smoothie. As I departed, I watched out of the corner of my eye as the kids jumped back into the dumpster with wide eyes as a nearby vendor unloaded his trash.

I grew to know and love and serve these children as I lived and volunteered in Talanga for a year. And it was those children who inspired my fellow 5 American volunteers and I to start a soup kitchen for children – Comedor Infantil – in the poorest neighborhood of Talanga, commonly called pantanal. Swamp. I arrived in Talanga in August 2009 with lots of ideas, a bachelor’s degree, and, most importantly, energy. I was met by a new language, “bucket showers,” safety issues, and poverty. Poverty like I had never seen or known existed. And I realized quickly that my American ideas and college-educated ingenuity were not the remedy for the deeply challenging needs of Talanga. It wasn’t easy, but I knew that the only way to start the Comedor would be to enter, really enter, the community – beginning with those dumpster kids. I reluctantly shelved my ideas of collaborating with an NGO [Non-Government Organization] or getting funding from the US (having money just seemed so basic, so necessary) and looked to my new local community for support.

Meanwhile, my fellow volunteers and I ran a support group for women who suffer from domestic violence. Through weekly meetings, we slowly gained the trust of several women from pantanal who were interested in helping us with the Comedor. One woman in particular, Marlen, was so eager to help out that she volunteered to cook for us.
With the help of a local social worker, we chose 12 children from pantanal between the ages of 4 and 6 to be the first served by Comedor. We also assembled a group of people from pantanal to help us find a location.

We opened on November 17, 2009 with Marlen cooking on the wood-burning stove, a few pounds of rice and beans donated from local businesses, and a freshly painted though still dilapidated rented two-room building. The kids filed in nervously, their mothers even shyer. It was probably the quietest day in Comedor’s short history. When Marlen informed us, “Ya esta la comida.” (The food is ready.), the kids sat on the floor and ate off of our own plates and used our spoons. We hadn’t yet acquired tables, chairs, or utensils. 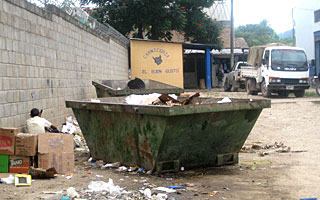 Now, almost a year after that scary first day of so many unknowns (Will there be food next week? Will the kids always sit on the floor? Will the moms collaborate?), Marlen – illiterate and struggling to put food on her own table – still exclaims, “Ya esta la comida.” with a glowing smile every day. We have 33 kids that eat her delicious food, now sitting on benches and eating off a table donated by a local teacher.  We also have lots of trucks and legos, donated by a Honduran non-profit organization, for the kids to play with, and arts and craft supplies from a local vendor. The mothers of the children are expected to help Marlen in the kitchen once a week on a rotating schedule. And, as an incentive for the Moms and to empower them, we have sewing classes and jewelry-making workshops taught by local craftsmen. A doctor has visited 4 times and offered medical services not just to Comedor but the entire community of pantanal. And even a local beauty school has come a few times to cut the kids’ and moms’ hair (and pick the lice out!). A Board of Trustees of Talangans now oversees Comedor and a local social worker coordinates daily activities for the kids. Even though my fellow volunteers and I founded Comedor, it was always and remains the community’s project.

I learned a valuable lesson as Comedor developed from an idea to a reality to a miraculously (almost) smoothly running organization. Ok, it rarely runs smoothly. The kids cry, there’s no more salt, the designated mother couldn’t come because her baby is sick, or she has to hand-wash the laundry at the river, or (yay!) she found a job.  But it is being run by and for the community. And the lesson I learned, uneasily, was to not worry about running smoothly, and to depend on my community. Support came in unexpected ways – from illiterate, abused, ignored people, and from 9-year olds who weren’t in school, and from businesses that were struggling to pay their rent. I learned to accept their support and honor it. And it didn’t stop a business transaction. Through seeking and accepting support for Comedor, I became really good friends with people whom I’d otherwise not talk to, learned to love them and let them love me. 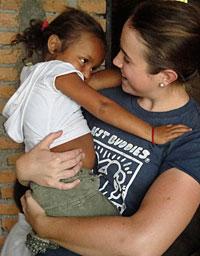 I hope that Comedor continues flourishing now that I’m back in the States and offering support from a distance. My original idea of finding an NGO to partner with is finally becoming a reality, and we are in the process of developing Comedor into a legal, non-profit organization here in the US and in Honduras to make plans for growth a reality. The future is bright for Comedor, but only because of its foundation in the local community of Talanga. The struggle to open and develop Comedor has challenged me, taught me, and transformed me. I have learned that a project without community and love is empty.  Donations to Comedor Infantil Pasionista can be made via the Passionist Volunteers International. Checks can be made out to Passionist Volunteers International and mailed to Fr. Lucian Clark, CP, Passionist Volunteers International, 526 Monastery Place,Union City, NJ 07087. Please write “Comedor Infantil” in the memo line.

[blockquote class=blue]From River Journal…
Carolyn Plunkett grew up in Tarrytown with her parents and four siblings. She graduated from Georgetown University in 2009 with a degree in Philosophy. Carolyn was in Honduras from August 2009 to August 2010; her year was sponsored by Passionist Volunteers International, a small Catholic church-based volunteer program. She is now pursuing a PhD in Philosophy at the Graduate Center at the City University of New York, and is back living in Tarrytown.[/blockquote]

About the Author: Carolyn Plunkett