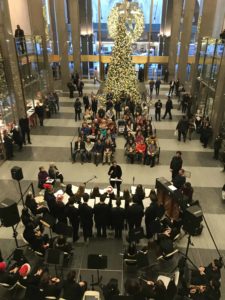 The Irvington High School Wind Ensemble and Chorale performed a variety of holiday classics during the annual Bernard Kaplan Memorial Music Program Concert Series, held in the main lobby of the MetLife building in New York City on December 4.

Members of the Wind Ensemble, under the direction of interim band teacher Dr. Aaron Patterson, and the Chorale, under Janet Gillespie, have been performing at the concert for several years. Each year, Judith Kaplan, who organizes the annual two-week event in honor of her late husband, hand selects only a few ensembles.

“Our students love to kick off the holidays with this concert, and their enthusiasm is contagious,” Gillespie said. “I am so proud of our students’ hard work.”

Dr. Patterson said the students and music department faculty were thrilled to return to the MetLife building to participate in the concert series.

“The students entertained a large crowd of businesspeople, tourists, Irvington alumni, family and passersby for an hour with nearly 20 holiday-themed selections,” he said.

The Chorale performed a set that included 16th-century works and such seasonal favorites as “Chanukah, O Chanukah,” “Deck the Halls,” and “Rudolph the Red-Nosed Reindeer.”