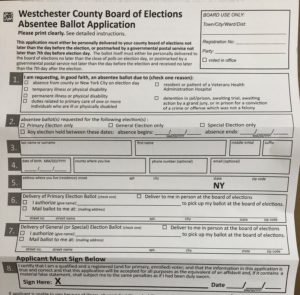 After some major back and forth, the Democratic presidential primary for New York is back on for June 23. Even with that race essentially over after Bernie Sanders dropped out to leave Joe Biden the presumptive nominee, there will still be much at stake in the other primaries held that day. Races for federal and state offices will be settled, including the party nominations for who will battle over the 17th congressional district seat in November.

Another thing you can count on is a primary process unlike any election you have ever seen before. In fact, you have the option to not physically see the primary at all, thanks to absentee being offered to every registered voter.

The state’s presidential primary and all other races can be voted on from the comfort and security of your own home. Since all public gatherings carry a potential risk of spreading Covid-19, Gov. Andrew Cuomo issued official state orders that expand the option to mail absentee ballots to any voter wishing to avoid polling sites during the June 23 primary. The governor first looked into sending ballots to all registered voters, but his administration felt such a move might violate the state constitution. This led to an executive order mandating every registered voter receive an absentee ballot application, with return postage paid, to give everyone the option to vote remotely. People wishing to take advantage of the absentee voting option must fill out the form and mail it back to their local board of elections. Just be sure to postmark, apply online, or fax the application by June 16. Visit www.elections.ny.gov for more information.

Since a state constitutional amendment would be needed for allowing every citizen to receive a mail-in ballot without a justifiable cause, Cuomo’s executive order broadened the absentee ballots’ definition of “temporary illness” to include “the potential for contraction of the Covid-19 virus.” The move makes everyone in the state eligible to vote in absentia, provided they check “temporary illness” as the reason. So, make sure you mark the box on your absentee ballot application.

If for some reason you do not receive your absentee application, you may request one by sending a letter to your county board no later than seven days before the election. The letter must contain an address where the ballot is to be sent, the reason for the request, and the signature of the voter. If a voter cannot pick up the ballot, or will not be able to receive it through the mail, someone can be designated to pick it up for them. If a voter is permanently ill or disabled, they have the right to receive an absentee ballot for each subsequent election without further application.

However, you do still have the option of turning up to a local polling site—they will be open. Though having an absentee ballot-only primary was briefly an option, the plan was scrapped for fear of being discriminatory, particularly to people who may need ballots in braille or in large print. Just be prepared to wear a mask and maintain proper space.​​​​​​​​​​​​​​​ “My two cents to people is please vote by absentee ballot so you don’t have to show up,” Gov. Cuomo said during one of his daily news briefings. “But then, if they have to show up, they have to socially distance, et cetera.”​​​​​​

Some glitches are to be expected, with this spring’s primary in Wisconsin serving as a stark example of how things can go wrong.  A rush of last-minute mailed votes were left uncounted, lawsuits were filed, and numerous coronavirus cases linked to in-person voting were documented. Therefore, voters are encouraged to use absentee ballots if possible, and to do so early, especially considering the state is expecting many more mail-in ballots after only 3.5% of New Yorkers’ voted absentee in 2018’s midterm elections. ​​​​​​​​​​​​​​​“There is a very real possibility that certain elections won’t be called on Election Night,” Secretary to the Governor, Melissa DeRosa, told the press. “…The hope is the majority of people are going to be mailing in their absentee ballot, and so we want to make sure that the counting process is done right and it’s thorough and that people continue to have confidence and faith in democracy, and so that may mean that certain elections are called a couple of days afterwards to make sure the counts are done properly.”​​​​​​​​​​​​​

The primary will surely offer important lessons. Since Cuomo’s absentee ballot executive order only applies to elections held on or before June 23, a new order would be necessary if the pandemic is still ongoing come November. Given the unpredictable nature of the novel coronavirus, that could be a real possibility, as is the fact that what we consider traditional voting may be upended for the foreseeable future.