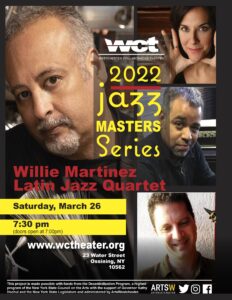 On Saturday, March 26, Westchester Collaborative Theater (WCT) continues its Jazz Masters music series with the Willie Martinez Latin Jazz Quartet. Martinez, an accomplished drummer, percussionist, arranger/composer and vocalist, will be joined by Nicki Denner on piano/vocals, Bernie Minoso on bass, and Anton Denner on reeds and flute. The performance will begin at 7:30 at WCT, 23 Water Street in Ossining.

Martinez has been a familiar face in New York City’s eclectic music scene for well over 20 years.  He has imparted his unique rhythmic and vocal styling upon groups performing everything from Gothic Funk at the New York rock club CBGB’s to Afro Cuban jazz at the Isaac Stern Auditorium at Carnegie Hall.  He has performed and recorded with such artists as the classic Cuban arranger/composer/bandleader Chico O’Farrill; legendary jazz trombonist Benny Powell; contemporary Pop divas Jewel and Faith Hill; such Latin legends as Bebo Valdes, Ray Santos and Hilton Ruíz; jazz greats Steve Turre, Mulgrew Miller and George Cables; and pop veterans Leon Pendarvis and Barry Eastmond.

Pianist/composer Nicki Denner has worked with Sheila E., Savion Glover, Michele Lee, Doc Severinsen as well other jazz and Latin artists in the U.S., Asia, Europe and Latin America. She has released three critically acclaimed CDs under her own name and is the musical director for the group Cocomama whose debut CD, Quiero, was included in the 2016 Grammy pre-nominations for Best Tropical Latin album.

Bernie Minoso, one of the most in demand bassists on the Latin and Latin Jazz scenes, started on the trombone at age 11. He played with boro- and city-wide ensembles while in high school, switched to bass at 21, and performed with local and touring bands. Minoso later joined world-renowned Cuban percussionist Mongo Santamaria and his group. He was in Paul Simon’s Broadway musical Capeman and traveled and performed with the Tito Puente Orchestra until the leader’s death.

Anton Denner began playing the saxophone as a teen.  After early studies with Lee Konitz and Joe Lovano, he performed at The Village Gate, Visiones, The 55 Bar, Birdland, and other venues. He has recorded and played alongside such jazz greats as Ray Charles, Rosemary Clooney, Clifford Jordan, Mel Lewis, Al Foster, and Dave Stryker.  Denner has been a featured soloist at The Napa Valley Jazz Festival, the Istanbul Jazz Festival (with the NY Jazz Giants) and the LaVillete Festival in France (with the Bill Carrothers Trio).

$20 Tickets can be purchased online at: https://williemartinezatwct.eventbrite.com

Limited seating is available; advance purchase is strongly recommended. Refreshments will be available.