We don’t usually write about events that take place in other states much less other countries. But when Barbara Kapetanakes, a River Journal contributor and PsyD. who practices psychotherapy in Sleepy Hollow, was witness to the historic and tragic fire at the Cathédrale Notre-Dame de Paris – commonly known as Notre Dame – this spring, we thought it was worth sharing her first-person story. And her amazing pictures. 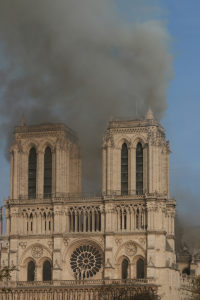 This past April I celebrated the 30th anniversary of my 20th birthday.  This major milestone required an “April in Paris” experience, and my husband and I took off for the City of Lights.  The evening before my birthday, at approximately 6:45 on April 15th, we came up from the Metro station and tripped over history.

After a day of sightseeing that included the obligatory trip to the Arc de Triomphe, pictures of the Eiffel Tower, and a wine-infused lunch, we headed back to our hotel to relax before deciding what to do with our evening.  We were staying in the heart of Saint Germain des Pres, a busy area with many subway lines running through it; for this return trip to our hotel, we were on a train that stopped near Notre Dame.  As we exited the station, I smelled something burning, and commented, “I smell incense burning,” assuming it was a street vendor hawking his product for tourists.  But as we walked away from the station, we not only realized there were no street vendors nearby, but that a large cloud of smoke was growing very close to where we were walking.  Being curious, we decided to walk towards the smoke rather than away from it, to see what was going on.  And upon seeing the cathedral smoldering, I began to have one of the most surreal experiences of my life.  At this point the fire had just begun—flames weren’t even visible yet, and there were only a few onlookers with cell phone cameras and shocked faces.  It was as if we were the only ones to have noticed the fire. 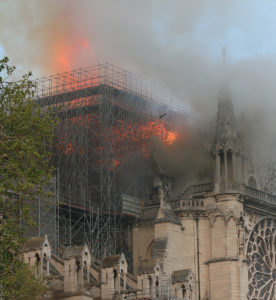 As the minutes passed, a crowd quickly started to form, and the smoke got thicker.  Still not sure what I was seeing, I only knew I wanted to document it, and I readied my camera and long lens, shooting away as the smoke grew and billowed up into the sky.  I recall my husband saying, “Well, where there’s smoke there’s fire.  This can’t be good.”  And I, not sure what I was seeing, just kept repeating, “Is that Notre Dame?  That can’t be Notre Dame.  I think it’s Notre Dame, and I think it’s on fire.”  I even asked my husband to whip out the travel book he was carrying and look up the pictures of the cathedral to prove to myself that this was, indeed, the iconic building I was watching become engulfed in smoke, and eventually flames.  Part of me wanted to cry when I realized what was going on and that there could be people—tourists, Parisians, clergy—inside the cathedral, caught in the flames, but part of me wanted to document history and just keep shooting on burst to get as many images as I could.

The crowd got bigger and people grew more excited and upset as we watched the flames first burst through the roof, then begin to move right to left towards the big bell towers.  I am sure I speak for everyone in the crowd when I say we were not sure if the whole building would be destroyed or even if the towers would crumble.  The police engaged in crowd control as the first responders started to arrive, moving us back from the edge of the Seine’s shoreline, but allowed the crowd to form and watch for about a half hour before evacuating the entire area. 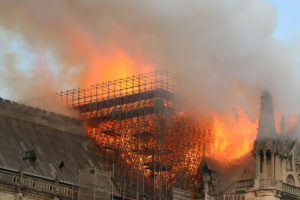 I was not there to see the spire fall, and my guess is that as they realized how bad the fire had gotten and worried for the structural integrity of the building, they felt it best to move everyone a safe distance from the scene.  Additionally, they brought President Macron in shortly after that—perhaps in an attempt to quell any fears that this was a terrorist attack, as of course there were mutters of this possibility and a lot of anxiety—and clearing the area tends to be important when heads of state arrive. 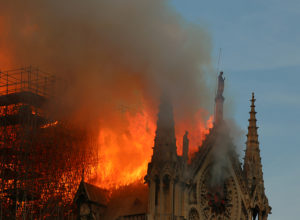 The rest of the evening continued to have that surreal feel that the world has during and after a tragedy.  A native New Yorker who lost a close friend in the World Trade Center and who didn’t know for hours if other loved ones were safe, I felt the same sense of fear, uncertainty, anxiety, adrenaline, and desire for information that many of us felt on that fateful day nearly 18 years ago.  What had happened?  What caused the fire?  It appeared to have started near the scaffolding, but was it really related to the renovation, or was it perhaps arson or other foul play?  Paris reminded me so much of New York City, and I knew the people in this beautiful old city were grieving for their landmark building the way we grieved and shuddered as our beautiful towers came down.  We kept the news on in our room, switching between English speaking channels that we could understand and French television that we struggled through but hoped would have detailed information and subtitles.   I got texts and calls from friends and relatives who were watching this unfold back in the States asking if we were OK, and if we had any idea of what had happened.  There was a lot of misinformation, including those surrounding the timeline of events, but I had proof on my Canon 70D of what happened when. 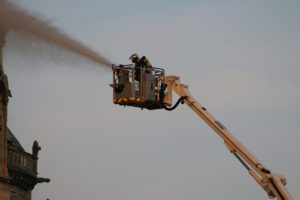 Amazingly, the building was not damaged as badly as it could have been.  Due to renovations, the famous gargoyles had been taken down, and many artifacts had been removed from the building for safekeeping elsewhere.  On my daily walk around town the next morning, I walked past the cathedral with my camera and there she was, standing tall, worse for wear, but overall intact, a symbol of resilience.  I documented the aftermath of the fire along with many others—tourists and Parisians alike—who stopped to commemorate the moment on their way to wherever they were going that morning.  Unfortunately, I hadn’t visited before the fire, so I have never been inside this beautiful building. Good excuse for another trip to Paris.