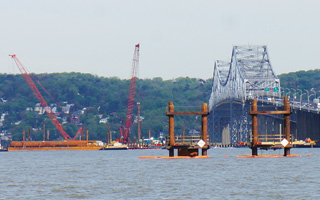 “Clearly Governor Cuomo has made a new Tappan Zee Bridge a priority for his administration, and from every indication the State is intent on pushing the project through as quickly as possible regardless of public concerns about the lack of funding, mass transit and very significant environmental issues,” Phillip Musegaas said.

At right, In the foreground, pile-driving tests conducted this summer.

Musegaas is an attorney and the Hudson River Program Director for Riverkeeper headquartered in Ossining, NY. The organization has said repeatedly that it is not against building a new Tappan Zee Bridge, but they are opposed to the decision-making process in place, or lack of process as witnessed by those close to the project.

New York State issued their Final Environmental Impact Statement (FEIS) and signed a “Record of Decision” (ROD) which is a formal approval of the FEIS. “Based on our initial review, their decision does not address our concerns about the impacts on the River, endangered species, and a financial plan which would include the funding to pay for the bridge. Lastly, it does not address any of the mass transit concerns on the bridge. Governor Cuomo has made it clear that this bridge will only be built for cars, and mass transit may be done in the future, but [he] is really unwilling to commit to that,” Musegaas said.

“Our primary concern is the construction of this bridge over a 5 to 6-year period and the impacts that will have on the River. Because there weren’t many changes in the FEIS our position is that unless the Governor takes further action to make those changes to reduce the environmental impacts, Riverkeeper is prepared to go to court to protect the Hudson River. “Our mission is to protect the Hudson. That’s where we start and that’s where we end our analysis. We hope that there is still room to have discussions about the how the project is done, but if we can’t have those we are prepared to slow this whole process down until it’s done right,” he stated.

When asked if he felt that the money needed to construct the Bridge was in place, Musegaas said, “What’s apparent to the public is a complete lack of any financial plan. The State has not put forth a detailed plan of where the loans will come from to build the Bridge and how they will be paid back. This is a critical shortcoming in the whole project. We have repeatedly asked the State to release their financial plan and they have countered with repeated promises to do so. As of this date they haven’t done so,” he added. Considering the financial scope of building a new bridge, it is inconceivable that no such plan has been released. “The State has applied for $2.9-billion in federal funding, but this is a $5-to-$6-billion project. The $2.9-billion request is part of a total $17-billion that the Federal government has made available for the entire country, and the State is asking for a big chunk of it.”

When Cuomo floated the idea of $14-15 tolls to pay for the new Bridge there was a huge public outcry and backlash. The Governor promptly pulled back on that idea. “That’s the last that we have heard about this financial issue from the Governor,” Musegaas noted. “It does a disservice to the public living and working in this area, who depend on the Bridge along with paying a $5 toll. If we really have to triple the toll to pay for a new bridge then the Governor should say so. If there is another way to pay for a new bridge then he should say so. The public deserves a clear answer on that because it has widespread economic consequences.”

The New York State Department of Environmental Conservation (DEC), the State Department of Transportation (DOT), the New York Thruway Authority and the New York State Bridge Authority have collectively stated  that the Atlantic sturgeon is the Hudson River’s largest fish. Their estuary logo depicts the Atlantic Sturgeon and can be seen on signs where major highways cross tributaries of the estuary. “It reminds travelers that these streams are intimately connected to the mainstream, and that the health of the Hudson depends on the health of its watershed,” states the DEC. The Atlantic sturgeon is capable of reaching 800 pounds and a length of fourteen feet. They possess bony plates that are armor- like and their history dates back to the age of dinosaurs. “Young Atlantic sturgeon have been especially scarce in the Hudson in recent years. Among spawning adult sturgeon, there is a very low ratio of females to males. It could take nearly 50 years for this fish’s population to rebound as sturgeon mature slowly. The species leaves the Hudson River estuary between its second and sixth year of life and females do not return to the Hudson until they are 18 years old,” the DEC adds.

“Atlantic sturgeon are our main concern because their numbers are so low and unfortunately there are less than 1000 adult breeding fish left in the Hudson River. Less than 300 of those are females, so we have a very low population, listed as an endangered species, that are under a lot of stress even without this bridge project. We are asking the State to produce their best science and take every approach possible to avoid impacts to this species. In terms of any new bridge, we have been very specific in our written comments to the State, asking them to reconsider the amount of dredging they intend to do and asking them for better scientific studies on the impact of pile-driving. They have refused to do that. Their position is that they don’t believe they will have any major impact on the River so they don’t need to do anything,” Musegaas said. He also pointed out conflicting studies done by the State that conclude there will be many sturgeon in the area under construction while other studies say there won’t be. “While the State did  pile-driving this summer, an underwater monitoring survey revealed over 125 tagged sturgeon in the vicinity of the Tappan Zee Bridge. This is information that the State is basically ignoring,” he said.

With regard to a mass transit component on a new Tappan Zee Bridge it is reported that the State’s position is that the Bridge can have mass transit added to it at a later date when they have additional funding. “The idea that they can build mass transit later is considered by many planning experts to be a fake promise. What we are calling for is that the State make a concrete commitment to implement a plan to phase in mass transit. We think bus rapid transit is the best alternative with a dedicated lane. The State is not committing to any of that,” Musegaas concluded.

Riverkeeper believes the State can do better and that the public is looking for leadership. Simply swapping out a new bridge for an older one is not going to solve the congestion problems on either side of the Thruway. Musegaas noted that, “ It’s sad to say, but everyone is fed up with the current bridge and now claim what a bad project it was and that it was poorly planned.” He went on to say that the last thing the State needs to do is repeat that mistake and build another bridge that won’t last or be flexible enough to address the transportation solutions of a key Hudson River crossing.