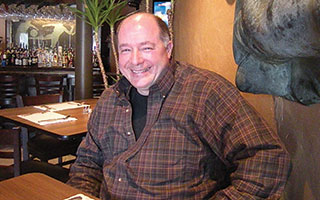 Gary Moretto is a rock star in Briarcliff Manor. He has a devoted following amongst residents, dare I say even groupies, who follow him from venue to venue to hear him play guitar and sing. Disguised as the amiable, middle-aged pharmacist at Value Drugs in Briarcliff, Gary can be found behind the counter chatting with customers, helping them with their prescriptions and sharing his undisguised pride in his son Mark’s accomplishments with the Briarcliff High Intel program or his daughter Lauren’s skill on the trombone. Beneath that white lab coat however, lies the soul of a musician with his heart on his sleeve. 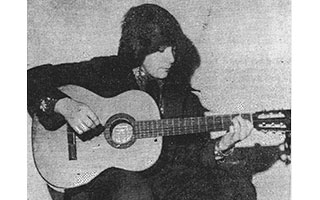 Gary has always been a musician since his earliest days growing up in Secaucus, NJ. There he learned to play the guitar and joined a High School band. His band consisted of a multi-racial and ethnic mix of kids from the different social strata of Secaucus. They practiced at the Secaucus sewage treatment plant because it was the only place they had the room and besides, they didn’t get into trouble for making too much noise. His parents supported his musical interests and his father even bought him a Les Paul guitar. He became good at it. Gary was a featured artist at the Teen Arts Festival at the Museum Cultural Center in Trenton and performed for 25,000 people. He also appeared at the Italian Arts festival in 1973 alongside such greats as Frankie Avalon.

When Gary graduated from High School his parents encouraged him to go to pharmacy school for practical reasons. He graduated from St. John’s College in 1980, and for all intents and purposes hung up his guitar until recently. The last time he remembers playing back then was at his wedding. He married and ended up in Briarcliff and had two children. Divorced for several years now, and his children teenagers, Gary had a real watershed moment when his good friend of 21 years committed suicide. Gary realized that he wanted to reclaim an important part of himself – the musician part. “I am either going to live or not,” Gary told himself. It was now or never. He went on E-bay and bought a Fender Stratocaster and had it delivered – sightunseen, chords unplayed.

Miraculously it turned out to be a great guitar.

Briarcliff Manor can boast of other talented musicians as well. Steve Wexler’s band, Top Shelf, is renowned in the area and features many outstanding musicians. It was Steve, who is a regular at Value Drugs, who suggested one day to Gary that he try and play at Lucy’s Lounge in Pleasantville; he even offered to take him there. Lucy’s has an open mike night on Tuesday nights. Gary got up his nerve and gave it a shot.

According to him, he “absolutely crashed and burned in flames” that first night. Fortunately for his fans, Gary did not give up. He found a mentor/teacher in Will Van Sise, another musician who has helped Gary with some of the finer points of musicianship, and he has discovered that there is new digital technology available to help him continue to improve. He feels like he is beginning to get respect from professional musicians for his music and this makes him happy. In fact, Gary is happier with everything these days.

All of a sudden Gary has a whole new and enriching life. He is a regular at Lucy’s, has played at the Haymount House in Briarcliff, Opus 465 in Armonk, and Fogarty’s in Bronxville. He has a wide range of new friends and he finds that music unites all ages and backgrounds, just like it did when he played with his High School band in Secaucus.

His two worlds of music and pharmacology training united one night. A fellow musician on stage began having chest pains and Gary recognized the signs of a heart attack, and convinced the reluctant man to go to the hospital. He had a major heart attack but survived due to Gary’s intervention.