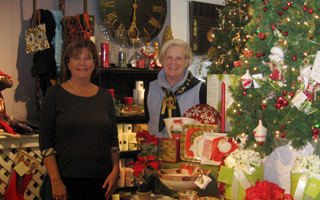 It can be risky to open a small business in the middle of an economic downturn, but John and Alyssa Chambal, who have co-owned Briarcliff’s Good Food for only five months, don’t feel like risk takers.

“It’s easy because the locals are supportive,” says John Chambal, a chef and former owner of Tarrytown’s Custom Cuisine. Good Food is the Chambals’ first attempt at business ownership since the closing of Custom Cuisine several years earlier, and so far, they say, Briarcliff has been good to them. It isn’t hard to believe. Of the three business owners I interviewed after the Chambals, two of them—Lynn Puro of March and Donald Borho of Wondrous Things—used the Chambals as an example of business owners who filled a new niche.  “It all depends on if there’s a niche for [certain] items,” says Puro, who would like her clothing store, March, to recreate the feeling of a Manhattan boutique for her Westchester patrons. “For me, there was a niche for this kind of store because there was nothing like this around. The owner of Good Food uses all natural, local ingredients in his food. 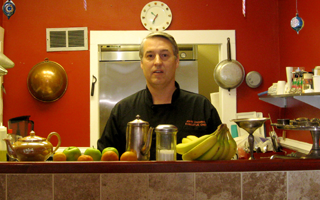 He fills a niche.”  In addition, this publication spoke with Marcene Hedayati, a Briarcliff Manor resident and Real Estate Broker at William Raveis/Legends Realty Group. She was quick to point out that Briarcliff Manor has a lot of “destination stores” that attract people from inside and outside of the Village. She also noted that Briarcliff has the least amount of vacancies within the communities her business serves.

Like Tarrytown and Irvington Briarcliff too has an eclectic mix of retail stores and eateries. Donald Borho, co-owner of Lifestyle Boutique, Wondrous Things, attributes the variety on Pleasantville Road to the newly founded Briarcliff Chamber of Commerce, which celebrated its anniversary in October and for which Borho serves as a board director. After eight years of owning two locations for his store, Borho decided to close the location in Croton and focus on the Briarcliff business because, he said, “We were finding that the traffic in Croton was really starting to drop off and this store was much more vibrant because of the traffic on Pleasantville Road and because we were close to 9A.” Borho remembers that before the Briarcliff Chamber of Commerce was established, Briarcliff business owners collaborated through the Merchants Association. “It was just a group of retailers. We did some cooperative advertising, some sharing of ideas. We tried to balance out what we were doing in the Village, so that we weren’t copycatting. We were making sure that we were tuned in to what our fellow merchants were doing.” By October 2010, the Merchants Association had evolved into a legitimate Chamber of Commerce, which has since organized events like First Thursday Celebrations and Harvestfests to promote the support of local business in Briarcliff. “I’d love for people to see 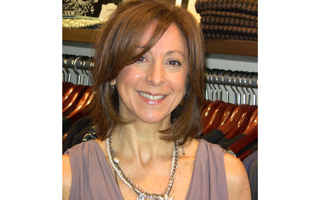 Briarcliff as a good place for an afternoon excursion,” says Sue Taub, owner of Holbrook Cottage, which has been a storefront in Briarcliff since 1999. “So that’s something as a Chamber that we can work on. I don’t know of a community that has the mix we have right now.”
Perhaps the active Chamber of Commerce, along with a wealthy clientele, has something to do with the increase in business that Briarcliff business owners have been seeing this holiday season. “This year we’ve been seeing an increase,” says Puro. “Last year was rough. Two years ago was worse, but it’s getting better.” Puro, who is a first time business owner, has also made her own personal adjustments. “I changed my lineup in the store a little bit. I added more reasonably priced items that give the same look and feel as the more expensive items.” Borho, too, says that business this holiday season has been better than in previous years.  Along those lines Marcene Hedayati added, “I don’t think we will ever be short of people who want to live here or visit and shop in the Village.” 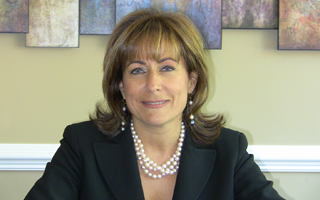 If there is a grievance for Briarcliff merchants it is the unfinished roadwork [at the time of this writing] that has prevented patrons from reaching the Village through route 9A.  “I think if this road [North State] wasn’t closed we would be having a better holiday season,” says Taub. “Supposedly it’s going to open next week [December 12] but we’ve lost September and November.” Alyssa Chambal of Good Food says, “It hurt businesses on both sides of 9A…Everyone is eager to see it fixed and hopefully when it is the weather won’t cause problems like this again.”  The road had to be closed for repairs because of damage sustained from Hurricane Irene. “It will be easier for everyone to get around and we’ll get a lot of our customers back,” says Chambal, “and hopefully new customers who just haven’t gotten here yet.”

Despite both the economic downturn and the road closing, the Briarcliff economy seems to have stayed relatively healthy. Marcene Hedayati said, “Real Estate may not be fabulous but neither is it as horrible as the media makes it out to be. Briarcliff is a unique community in a unique county.” 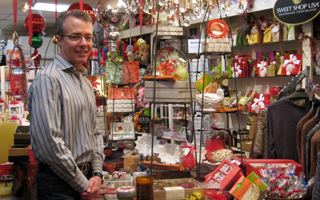 Unlike on Tarrytown’s Broadway and Irvington’s Main Street, Briarcliff’s Pleasantville Road has remained free from vacant storefronts, and the consensus among Briarcliff business owners is that business is getting better. Sue Taub, whose store is decked out for the Christmas season, nicely sums up the benefits of shopping locally during the holiday season; “One of our reasons for being is our customer service…we try to create an atmosphere of calm in here, which is different from what you’ll get in a mall. Our clients know the sales associates and they see them as a solution.”