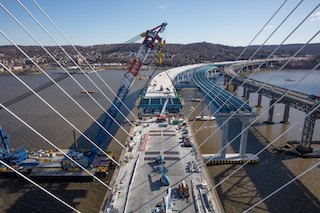 If your daily routine takes you to our neighbors to the West – our Rockland County neighbors that is – you may be wondering what the update is on our New, NY Bridge. According to reports, the Tappan Zee replacement is still set to be completed in 2018. The Tappan Zee bridge in current use took just 4 months shy of 4 years to build and according to the official NYS Bridge website, wasn’t built to withstand the now estimated 140,000 or more cars which cross it every day.

With the unexpected inclement weather throughout March, thoughts about the new bridge’s timeline may be in question. According to a cement mason with Local 780, who’d like to be kept anonymous, weather has been an issue.  “The job itself has been shut down a few times due to high wind gusts and snow storms, just as a safety precaution.”  Generally, however, she says the work is going “smoothly.”

“The supers want everything to be as perfect as possible because the inspectors are extremely meticulous.” She says she hasn’t been given any date of completion thus far.

This time last year with a barely-there bridge scene, commuters went cashless as the existing 3-mile stretch resorted to relying on prepaid E-ZPass tags and cameras taking photos of passing license plates. For those who do not pay ahead, monthly bills are sent out; a process that is still in place.

Jumping ahead to recent weeks, the first connection between the cable-stayed main span and the pier-supported approaches have been made thanks to the “I Lift NY” super crane – a machine that the NYS New Bridge website says, “is helping to reduce construction time by months” and can reportedly lift over 1900 tons; that’s 12 times the weight of the Statue of Liberty.

Among the obvious reasons a new bridge is being built, like the overabundance of daily commuters, is also the high accident rate. Because of heavy traffic and narrow lanes, the current standing Tappan Zee holds twice the average accident rate per mile as the rest of the 570-mile Thruway system. Between the hundreds of millions already spent and the foreseeable future cost to maintain the current bridge, the approximately $3.98 billion New NY Bridge seems to still be the safer, more economic option.

One Irvington resident says she’s happy to wait; “I barely go over the bridge, so I don’t mind. It isn’t the best view when dining on the river in nicer weather, but what can you do?”

The official NYS New Bridge website lists viewing platforms on both sides of the historic Hudson as the Scenic Hudson RiverWalk Park in Tarrytown and Memorial Park in Nyack.

Looking forward, the westbound main span is set to be completed in the coming months.

Commuters are set to be shifted to the new bridge once completed and the “I Lift NY” super crane will be tasked with demolishing the old Tappan Zee bridge which has been doing its job since its grand opening, December 15th, 1955.

Residents can learn more about updates to the new bridge by calling the bridge hotline or following the official website www.NewNYBridge.com.