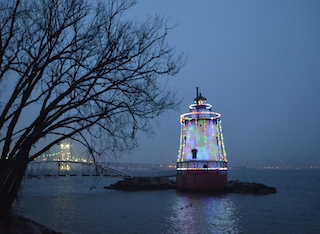 If one were to compare the activity at Sleepy Hollow’s Edge-on-Hudson site to a ship at sea, “full speed ahead” would be appropriate. The temporary bridge crossing over the railroad tracks on Beekman Avenue has been completed.  The reinforcement of the bridge has allowed trucks to proceed to and from the site bypassing an alternative route through Tarrytown.  Within the next sixty days the entire site will have seen demolition work of the concrete base, and not just Phase 1.

250,000 cubic yards of soil will be needed to raise the building site by an estimated three feet where needed. That translates to 400,000 tons of material for compliance with new flood plain regulations.  Of note, and much to the developer’s credit, is that barges are being used to deliver fill, with each barge effectively taking 80-90 truckloads off of the roads. At present, twenty-five to thirty percent of all needed fill is being offloaded by barges. All waterborne delivered fill is being tested on-site before being accepted.  Working in concert with the Department of Environmental Conservation (DEC) has proven to be “phenomenal” according to Peter Johnson who is overseeing the entire redevelopment operation. To date only 2 barges have been turned back due to improper fill.  Since September, 100,000 cubic yards has been received on-site and it is estimated that within 6-9 months the lion’s share of importing fill will have been accomplished.

2017 will usher in the beginning of a permanent bridge over the railroad tracks that will accommodate two lanes of traffic. The projection for this bridge’s completion is by year end. Something new, and made possible by the builders of the New NY Bridge, 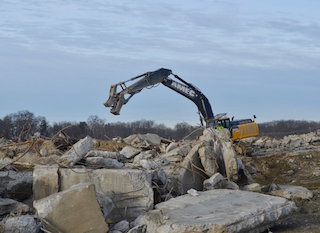 has been a grant for approximately $270,000. With this money, the Village of Sleepy Hollow along with Edge-on-Hudson intend to create a waterfront plaza with a Hudson River overlook and possibility for boat docking as well. This plaza is to be completed before year’s end.

In February, installation of utilities, sewer, water and telephone capabilities will begin with the Phase 1 development.  In the Fall the first vertical components, which is “developer speak” for buildings, will begin.

Edge-on-Hudson and the Village have recently begun conversations on new possibilities for the remainder of the site, namely the buildout along the waterfront.  The “Special Permit” that was painstakingly put in place over years of planning has been revisited. In the original development plan inner portions of the site were to mimic a “Main Street” type of feeling.  That placed restaurants off of the waterfront. Peter Johnson feels that prohibits people from experiencing the river. By looking into revising the development plan to include residential and restaurants with river views, he is convinced the development will have more appeal and draw people to it.  This consideration in no way affects the buildings’ setback from the river nor the Riverwalk path in front of them.

With an 8 to 10-year timetable for completion of the entire Edge-on-Hudson site, the developers are making a long-term commitment within the Village of Sleepy Hollow. Their presence is not only visible at the most westerly portion of Beekman 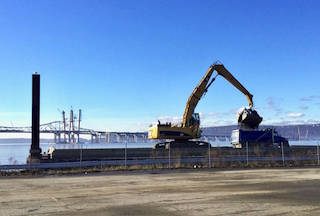 Avenue, it is also apparent in the community events they host and those they sponsor.