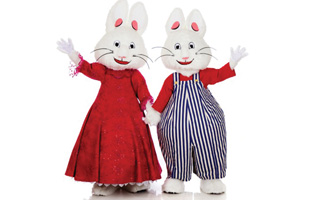 The Laurie Berkner Band Holiday Celebration Concert
Saturday, December 1
11am & 3pm
The Laurie Berkner Band Holiday Celebration Concert will include all of your favorites plus songs from the new CD A Laurie Berkner Christmas!
One of America’s most beloved children’s music artists, Laurie Berkner has an amazing ability to create music that is loved by both children and parents. She is a regular on Nick Jr.’s “Jack’s Big Music Show” and her live shows are legendary. Her most famous songs include “We Are The Dinosaurs,” “I’m Gonna Catch You” & “Bumblebee.” Fifty premium seats include a post-show meet & greet.

Max and Ruby bring to life a wonderful tradition this holiday! Inspired by Tchaikovsky’s Nutcracker Suite, the beloved bunny siblings star in the brand new musical production Max & Ruby in the Nutcracker Suite: “Max & Ruby have been anxiously waiting to see The Nutcracker ballet with Grandma. Imagine their disappointment when a snow storm keeps them at home! A story of the Nutcracker will have to do! So vivid is Grandma’s storytelling that the characters in the ballet come to life right before their very eyes!  Max & Ruby marvel at the sight of the many enchanting guests, including a Spanish bullfighter, the Sugar Plum Fairy and the Nutcracker Prince.” (Supported by Citibank.)