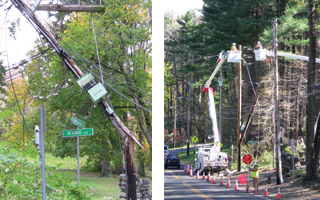 While the only real infrastructure damage suffered by Tarrytown was a flooded basement in the recreation center which will require a new furnace, the Village could still see its clean-up costs run north of $200,000. The Village saw the hurricane winds topple an inordinate number of trees, most of which were seemingly outfitted with homing beacons that allowed them to only land atop electrical wires or in the middle of a road. When wires weren’t being chopped down by a wayward tree, the poles themselves decided to fall over or snap in half. The resulting mayhem meant countless hours of overtime for police, DPW, and other Village staff.

Tarrytown went right to work, but as the thousands of residents who went without power for three or four days or more can attest, the initial response was slower than they would have liked or have seen in prior outages. “The first couple of days we worked directly with Con Edison on clearing roads, because if a tree is touching an electrical wire, we can’t touch it,” explains Village Administrator Mike Blau. “We have to work with ConEdison to make sure the power is off on the line, and then we work with them to remove the trees, but they’re the ones involved in getting the tree off the power line.”

Since ConEdison understandably concentrated on the harder-hit areas of Manhattan and the outer boroughs before focusing on Westchester, this meant that many a downed line or blocked road remained uncleared for a number of days. While no one at Village Hall was happy about the delay in restoring power to some Tarrytown residents, what bothered them the most was the difficulties they encountered in communicating with residents. “We communicated the best we could,” says Blau. “I think what we need to do is get a better email blast system together, so that way you can get the word out to everybody who wants us to get the word out to them. We did robocalls and we put information on our website. Friday and half of Saturday we hand-delivered fliers with information to residents who didn’t have power. What we’re going to try to do is figure out a way to do a better job of getting the word out [in the future]. I think we did a good job, but I think we can learn from this disaster and do a better job [next time].”

Looking towards the future, Blau allows for the potential need to begin to budget for disasters such as these if they become an annual ritual, but isn’t sure if the idea is feasible. “It is something we’re going to have to deal with, but that butts up against the 2% tax levy cap,” he says, “because what we’re doing is adding money into a budget where we have very little flexibility to begin with.”