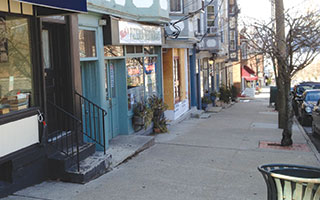 After more than three years of examining and working on the issue, the Board of Trustees of the Village of Irvington is set to approve a new set of codes and regulations regarding the posting and creation of signs and awnings in front of businesses within the Village limits.

“When new businesses come into Irvington, they don’t have any guidelines to say what they can do or cannot do or shouldn’t do,” says Betty Laurenson, President of the Irvington Chamber of Commerce.

“It just seemed very timely to get something in writing so that when a new business comes in they can do everything right the first time instead of doing something that the Village would not want or approve.”

Laurenson is a member of the Irvington Business Improvement Committee, which also includes representatives from Village Administration, the Historical Society, the Library, as well as other interested Irvington residents. The Committee has served as an idea lab for a number of business-related issues within Irvington and has spearheaded the current effort to update and amend the Village code with respect to signs and awnings.

The desire to define limitations and provide standards without stifling creativity contributed to a delay in bringing a draft of the new rules before the full Board. “When you think about it, putting signs up or dressing up a business is a creative business itself,” says Irvington Village Administrator Lawrence Schopfer. “The desire was to come up with some regulations to allow businesses the freedom to be creative but to avoid some of the clutter of signs all over a storefront.”

Finding this compromise wasn’t easy, explains Schopfer. “One of the things we learned is that no matter how much you think it through, no matter how many things you think of to try covering your laws, there will always be some way for someone to do something creative that will get around any provision you put in there.”

“The Board did extensive research,” says Schopfer. “[The Board] looked at other communities’ codes and at practically every storefront in this Village to try to get a feel for the types of storefronts that fit the regulations and the ones that don’t, and to try to come up with a way to put that into words.”

The final regulations include such restrictions as prohibiting flashing neon lights and roof signs, or more than 30% of any window being covered by signs, and stating that “temporary” and “open house” signs can only be out between 8 a.m. and 8 p.m. No signs are allowed to project from any building above the second floor, and the stipulation is in place that, moving forward in order to receive a permit, all new signs must be approved by the Board of Architectural Review.

The requirement for every sign to get a permit threatened to be a stumbling block until a solution was found. “One of the key factors in this particular draft compared to previous drafts is that there is a certain level of grandfathering that will take place,” says Schopfer. “There are probably plenty of signs for our businesses that don’t have a permit and were never documented in the past. The people who have those types of signs are not going to be required to come in and legalize them or get a permit now. They’ll be grandfathered in as long as they’re not on the prohibited list.”

The draft of regulations was brought before the Village Board of Trustees at a public hearing on March 18, after this publication went to print. For information on the outcome of that meeting, visit www.IrvingtonNY.gov.