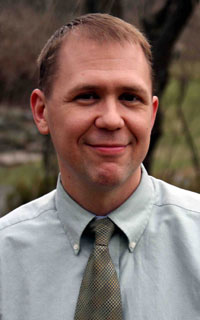 This month, we check in on life-saving CPR lessons, a New York State Master Teacher, and an area administrator tasked by Governor Andrew Cuomo to review and recommend changes to the State’s Common Core educational system.

Irvington
Middle School Students Explore Personal Identity
Seventh graders at Irvington Middle School used recycled boxes and cartons to help them answer the question, “Who am I?” as part of a study of  the concept of personal identity. Inspired by the work of artist Michael Albert, students in Kelly Kozak’s English language arts class were tasked with exploring factors that impact or influence the development of one’s sense of self, as well as consider which areas of one’s identity remain the same throughout life and which evolve over time.The personal identity exercise is the first in a series of exercises investigating several “essential questions” which the students will undertake over the course of the school year.

Math Teacher Once Again Named New York State Master Teacher
Irvington Middle School math teacher, Eli Byers, was once again named as a New York State Master Teacher, an honor recognizing his work as an outstanding leader in the teaching field. Byers was first selected as one of the inaugural honorees of the State-wide program dedicated to supporting outstanding math and science teachers in New York State in 2013. Being part of the Master Teacher program has allowed Byers to participate in peer mentoring and professional development opportunities, and he has facilitated a number of discussions with fellow educators on Common Core Learning Standards, strategies for engaging students, and ways to bring innovative digital tools into the classrooms. “The best part has been the relationships I forged with other talented educators,” Byers said. “I have learned so much from them, not just because they are quality teachers, but because I have found that anytime I discuss teaching with another person I reflect on why I make certain decisions and how I can improve.” “It is wonderful to see his hard work and commitment recognized in this way,” said Irvington Middle School Principal David Sottile. “Together with our colleagues at Irvington Middle School, he works to build and maintain a rich and supportive environment for our students.” 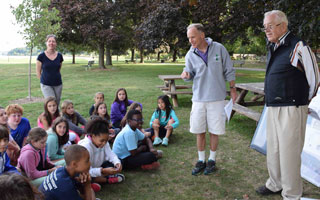 Irvington Students Hit the Water in Hudson River Study
Fifth-graders at Irvington’s Main Street School spent the day outdoors in Matthiessen Park on September 25 studying the Hudson River. Projects included testing air and water temperature and studying wind and water current patterns. Students were also taken on a journey through the history of the river and the region by local historian Bob Connick and former Irvington High School principal Scott Mosenthal. To prepare them for the Hudson River study, students were taken out sailing on the river the week before, to experience the river first-hand. The goal of the program, according to Main Street School principal Joyce Chapnick, is to teach students the importance of environmental responsibility and the value of understanding their surroundings. “We’re very lucky Matthiessen Park and the Hudson River are right in our backyard,” said fifth-grade teacher Susan Wallace. “We learn so much about the ecosystem from it, and since it’s so hands-on the students are free to explore in a natural setting.” 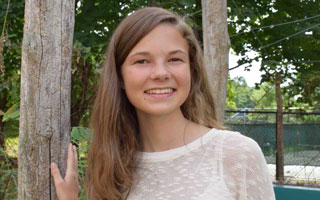 Irvington High School freshman Sydney Cuff raised $800 and created a tree trail at the O’Hara Nature Center. After consulting local arborists earlier this year, she attached signs to about two dozen trees stating each tree’s common name, Latin name, and facts about the tree in question. Cuff began her project as part of her involvement with the Community Advisory Board, working alongside Irvington Recreation and Parks Superintendent Joe Archino, as well as Irvington Woods Committee members Barbara Defino, John Duvall and Rich Goldman. The trail starts at the nature center, follows the North South Trail and circles back to the nature center. “I can walk through the woods with my eyes closed because I know the trees so well,” says Cuff. “I feel like people should know what’s around them. I hope everyone who walks the tree trail learns more about nature.” 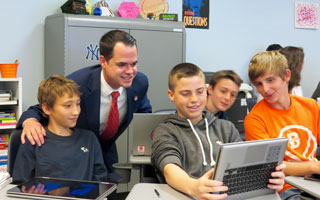 Senator Carlucci Visits Briarcliff as Technology Initiative Enters Second Phase
New York State Senator David Carlucci was on hand at Briarcliff Middle School on September 22 as students explored new technological devices that have been introduced to the classrooms. These include touchscreen laptops that can transform into tablets, mobile furniture that encourage collaboration, and writable walls. All improvements, funded in part by a Briarcliff Manor Education Foundation grant, are a part of the next phase of the Briarcliff 2.0 technology initiative. “It’s so smart to have furniture that really adapts to the learning environment,” said Senator Carlucci. “We need to make sure that our students have the most appropriate learning environment possible. This furniture is state-of-the-art, efficient, and ensures that students can learn as much as possible in the time frame they have.”
The touchscreen laptops were introduced last year at Todd Elementary School in grades four and five. The goal is for all students in the District, grade four and up, will eventually have personal technology available for their use both at school and at home. “We must address student access to school resources, classroom experiences and activities, professional development for teachers and staff, and our learning environments if we are to properly prepare students for their future,” said Superintendent of Schools James Kaishian. “These are the fundamental issues that the Briarcliff 2.0 initiative attempts to address.” High School Students Learn CPR
Students at Briarcliff High School are getting hands-on training in CPR this year in their physical education classes. The new instruction is in response to the new State law requiring every high school graduate to have rescue breathing CPR and AED training as of October 1.
Instruction includes steps to take before performing CPR on an individual, such as calling 911 and removing the victim’s shirt if needed, and emphasizes that CPR requires 100 chest compressions a minute to be effective. “I think it’s really important to know in case you’re in a situation where you need to save a life,” said BHS senior Matthew Hausman. “Just walking down the street, if you see someone down – they said 70 percent of people don’t know CPR – now I would know how to save that life.” 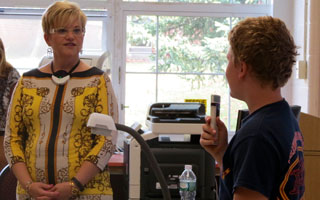 Principal McDermott Teaches the Golden Rule of Todd School
Todd Elementary School Principal Nadine McDermott met with students in each grade to introduce the Golden Rule of Todd School in the year’s first Principal Read Aloud – treat others the way you would want to be treated. The book she read was Trudy Ludwig’s “Just Kidding,” which deals with the issue of teasing in school. After reading the book, McDermott asked the students to think about what the book had to say, and to discuss how they can listen to their classmates with understanding and empathy, The Read Aloud served as an introduction for the students to the year’s Habits of Mind lessons. “Habits of Mind are really patterns of thinking,” McDermott told students. “They are routines that your brain gets into.”

Tarrytowns
Board of Education Honors Kimberly Kaczmarek
The Board of Education for the Public Schools of the Tarrytowns recognized the commitment and achievements of long-time Tarrytown teacher Kimberly Kaczmarek by awarding her the District’s first-ever Extra Mile Award. Ms. Kaczmarek has taught in the District for 30 years, and has worked tirelessly to bolster the lives and opportunities of the District’s special needs students. The award comes on the heels of her most recent accomplishment, the organization of a Unified Basketball Team made up of general education and special education students from Sleepy Hollow and Brewster High Schools which went on to represent the United States in this past summer’s Special Olympics World Games in Los Angeles, bringing home a Gold Medal. Other notable accomplishments of Ms. Kaczmarek recognized by the Board included bringing the Mid-Hudson Special Olympics games to Sleepy Hollow for the past two years, rallying the community around this year’s Special Olympics Relay Across America and ensuring that Sleepy Hollow athletes were able to carry the torch, running the high school’s Pioneer teams, and overseeing the Sleepy Hollow Academy of Disability Education.The Board gave Ms. Kaczmarek an extended ovation as she accepted the award alongside her son Zachary, a graduate of Sleepy Hollow High School currently attending the School of Visual Arts in New York City.

Students Send Flat Stanley Around the World
The book “Flat Stanley” by Jeff Brown is a staple of early elementary-aged children. The concept is simple: a young boy named Stanley is squashed flat and proceeds to have a series of adventures in his new form. One of the things Flat Stanley does is get mailed around to his friends. In 1995, a Canadian teacher ran with that idea and created The Flat Stanley Project, which encourages children to mail their own Flat Stanleys around the world. This year, third grade students at Washington Irving School are taking part in the Worldwide Flat Stanley Project by creating their own, paper Flat Stanleys and sending them off to friends, family, and others across the globe.
Students mailed their Flat Stanleys to whomever they wished, along with a letter asking the recipient to treat the visiting Flat Stanley as a guest and to return him to the sender along with a letter, postcard, or pictures of Stanley’s trip. When the Flat Stanleys begin to return, students will document his journeys on maps and learn about the different worldwide locations around the globe to which he travelled. 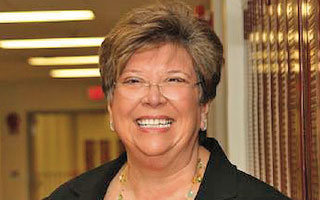 High School Principal Named to Governor’s Common Core Task Force
Governor Andrew Cuomo has named Carol Conklin-Spillane, Principal of Sleepy Hollow High School, to serve on his Common Core Task Force – a group of educators, administrators, teachers, parents, and politicians charged with reviewing New York’s current Common Core educational system and identifying places where it can be overhauled to better serve the needs of New York’s public schools.
“There’s a lot that’s inherently good about raising standards,” says Principal Conklin-Spillane. “Our job as professional educators is to manage implementation so that it supports student learning.” The Common Core has proven controversial during its initial rollout, with many New York State educators expressing concerns with a number of areas, including the reliance on testing, a rushed rollout, and age-inappropriate test questions. One of the most frequent complaints by opponents of the Common Core is the fact that very few educators were involved in their creation, an error of omission which Conklin-Spillane believes the Task Force will rectify. “I’m pleased to see the number of educators on the Task Force,” she says. “It’s important to bring this discussion back to the real work that’s being done in our schools every day.” The Governor has promised that the work of his Common Core Task Force will be as transparent as possible. It will include input from educators and parents from all over the State, and anyone who wants can submit their thoughts and ideas directly to the Task Force via its website, located at http://www.ny.gov/CommonCoreTaskForce. The Common Core Task Force is slated to complete its review and deliver its final recommendations by the end of the calendar year, at which point its report will be made public.