On Sept. 21, 2020, trustees of the Village of Tarrytown held a special session (virtually) to confirm the appointment of Tom Butler as Village Mayor, succeeding Drew Fixell.

The session provided an opportunity for elected officials from throughout Westchester to thank Fixell for his 20 years of service. Following are some of those comments …

“Drew It’s been a real pleasure and privilege to work for you and with you. I and all of the staff wish you and your family absolutely all the best . . . You have always been a decent person and a wonderful Mayor and leader for the Village.”
Richard Slingerland, Village Administrator

“You have your priorities right. It shows your character and your professionalism and what you value in life. You have given so much to the community … there comes a time when you have to say … there are some priorities that matter more than others.”
Francis Sheehan, Town Councilman

“The Village of Tarrytown is a role model for other communities. The way you’ve managed governing over the years has been the envy of many elected officials around the county, and around the state. I thank Drew Fixell for his leadership and outstanding service.
Paul Feiner, Town Supervisor

“Everyone didn’t always agree at first, but you worked extremely hard to bring people together. Whether in Tarrytown or as a leader in the Municipal Officials Association, the kind of leadership you have is exemplary for all of us.”
Ken Jenkins, Westchester Deputy County Executive

“You’ve handled [being Mayor] with great grace and great dignity ... As a person who is a practitioner in the same art that you’re practicing, congratulations on a job well-done. Thank you for all of that service.”
George Latimer, Westchester County Executive

“Drew Fixell made my job as a county legislator and then as an assembly member so much easier in representing Tarrytown. I never heard any complaints from Drew. I only heard suggestions on how to make things better.”
Thomas Abinanti, Assemblyman

“When I became a Senator in 2007, getting to know all my new constituents could have been hard. But because of the way I was received by you … [it] was really an exceptional experience, and I know it was part of the leadership that you brought to the Village.”
Andrea Stewart-Cousins, Senate Majority Leader 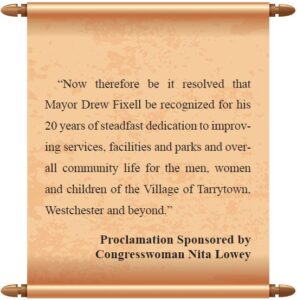 “Now therefore be it resolved that Mayor Drew Fixell be recognized for his 20 years of steadfast dedication to improving services, facilities and parks and overall community life for the men, women and children of the Village of Tarrytown, Westchester and beyond.”
Proclamation Sponsored by Congresswoman Nita Lowey