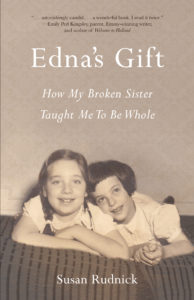 Susan Rudnick has written about her relationship with her sister as a special love story.  Over the span of their lives, Edna, her mentally and physically challenged sister, became her life’s greatest teacher. Edna never judged herself or others by what they looked like, or couldn’t do. She was quite aware that she couldn’t hop, skip or catch a ball easily, but these were mere facts, nothing to feel ashamed of. She was “differently abled” way before the term was invented.  In Susan’s teen years, she discovered her own invisible disability, MRKH, a syndrome that includes being born without a uterus.  She spent many years feeling inadequate and ashamed.

But with Edna’s way of being as a model, she learned to realize that she was whole the way she was. She wasn’t missing anything. Her way of being a woman was part of her unique beauty. It was a fact of her life, but she learned to hold it in a different way. Eventually she married and became the parent of a beautiful daughter through adoption.

Using poetic language with a light touch, this memoir captures and then transcends the struggle of growing up with a special needs family member to become a universal story of brokenness and wholeness and the possibilities of thriving within love. Above all the book imparts one powerful message: life may be unpredictable, even traumatic – but if you remain open, strength, joy and wisdom will come to you from unexpected sources.

The book’s prologue is excerpted here:

Excerpted from Edna’s Gift: How My Broken Sister Taught Me To Be Whole by Susan Rudnick, copyright Susan Rudnick 2019

On the day of the fire drill, it became clear that my sister, Edna, was different from other people. Different from me.

I was seven. Edna was six.

The bell had sounded three times and my second grade class at PS 90 in Richmond Hill, Queens, was ready. We stood at our desks waiting for Miss Kruger to tell us to get in line with our partners. She reminded us that there was to be no talking. We were to move quickly down the hall and outside, and then stand in line in the schoolyard until the fire drill was over. Before we went back inside, I looked for Edna, but I couldn’t see her.

That’s because while the rest of the school waited in the yard for the drill to be over, Edna sat alone in her first-grade classroom. She couldn’t button her coat by herself or walk as fast as her classmates. Her teacher, Mrs. Dawkins, didn’t want to spoil her speed record and risk not getting the class commendation, so she’d left Edna behind.

“What happened?” I asked Edna at the supper table.

My sister Edna was both the most comforting and the most maddening person I’ve ever known. She was also my greatest teacher and I would have been lost without her. Growing up together, she was the officially challenged one—until as a teenager, I discovered my own invisible handicap. But it is only now, decades later, that I can see how our intertwined lives were spun from wholeness and unconditional acceptance, as well as deficit and disability.

Susan Rudnick lived most of her life in NYC, but for the last 13 years has lived in Pleasantville , where she wrote this memoir.