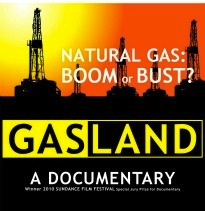 The largest domestic natural gas drilling boom in history has swept across the United States. The Halliburton-developed drilling technology of “fracking” or hydraulic fracturing has unlocked a “Saudia Arabia of natural gas” just beneath us. But is fracking safe? Could it happen here?

New York State’s citizens have barraged state environmental officials with an unprecedented 60,000 comments on this issue, and just last week the state Supreme Court upheld the right of two towns to prevent fracking for natural gas in their town. Yet, New York State’s DEC says they will release the final phase of work on their proposal to allow hydrofracking of natural gas in spring 2012.

On the eve of New York State’s decision making on fracking, Hudson River environmental groups will join forces to show Gasland–the award winning documentary about fracking and its timely message for New York State–and discuss the connection between gas drilling and drinking water. The film will be followed by a conversation with Riverkeeper’s Kate Hudson.

The Program will be held on Saturday, March 10 at 7:00 PM. Tickets are $10, and $5 for teachers, students, and seniors. The event will be held at Beczak Environmental Education Center, 35 Alexander Street, Yonkers, NY 10701. For additional information visit www.beczak.org.

Gasland is a Sundance award-winning documentary on the surprising consequences of natural gas drilling. When filmmaker Josh Fox is asked to lease his land for drilling, he embarks on a cross-country odyssey uncovering a trail of secrets, lies and contamination. A recently drilled nearby Pennsylvania town reports that residents are able to light their drinking water on fire. Variety magazine calls Gasland  “…one of the most effective and expressive environmental films of recent years.”

ABOUT FRACKING IN NEW YORK STATE

A rocky formation under parts of New York State, the Marcellus Shale, holds some of the largest natural gas reserves in the nation. To break up shale formations and release the gas, energy companies use a process called high-volume hydraulic fracturing, or hydrofracking, which involves injecting millions of gallons of chemically treated water underground..

New York State has had a moratorium on fracking since 2010 while it has been conducting an environmental impact analysis on this damaging practice. The Independent Oil and Gas Association of New York wants the state to speed its decision so that new drilling permits can be issued this year.

Major environmental groups, including Riverkeeper, have hired their own technical experts to review the state proposal and argue that the state is far from close to completing an adequate review. Looming large, they say, is the lack of a detailed plan to dispose of the millions of gallons of wastewater per well that fracking will produce.

If DEC issues a final environmental impact statement (known as the Supplemental Generic Environmental Impact Statement) on hydrofracking this spring, Watershed Program Director Kate Hudson said there still would be “glaring gaps” in the process.

“In light of the fact that they have 60,000 comments to read and respond to, we are astonished that they are proposing to do that and what it tells us is that they are going to be releasing a flawed document that does not address many of the issues that we and other people have raised and this will only ultimately lead to further delays,” Hudson said.

Those delays would come in the form of lawsuits filed by Riverkeeper and others challenging the findings of the environmental documents.

Kate has served as Assistant Attorney General in New York State’s Department of Environmental Conservation’s Environmental Protection Bureau. She was a member of the Bureau’s Hudson River Team, and was responsible for preparing the State and Federal Trustees natural resource damage claim against General Electric, for their contamination of the Hudson River with PCBs.

Building upon that experience, in 2007, Kate rejoined the NYS DEC where she created and staffed a ten person unit dedicated to pursuing claims for natural resource damages against a wide variety of polluters for their discharges of hazardous substances and petroleum. As Director of the unit, she developed policy and budgetary documents in support of the Department’s natural resource initiatives, represented the Department in the development of claims, coordinated assessment and litigation activities with Federal Trustee agencies and Indian Tribes, and negotiated settlements with responsible parties.

Kate is a long-time resident of Gardiner, NY, living in the shadow of the Shwangunk Ridge, where she is an active outdoorswoman who enjoys hiking, biking, skiing and rock climbing. She is also an experienced sailor, who races on the Hudson River, and has twice competed in the Race around Long Island.