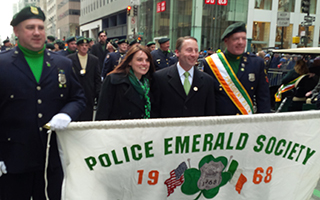 For us at River Journal we had to reach out to Mr. Astorino and ask “How come?” and “How come now?” We spoke with William O’Reilly, a spokesman and campaign consultant. He is a partner at The November Team, LLC, a political communications shop. O’Reilly has been involved in NY races for 25 years, including Rob Astorino’s 2009 and 2013 wins.

The answers we received made sense, and in fact, shed a great deal of light on the differences between the two men and what Rob Astorino brings to the table, be it in White Plains or Albany.

First things first, however. We asked O’Reilly what the reasons were for running for Governor. The answer distilled to a clear and succinct response. If the County government in Westchester is to move forward and take the necessary next steps in continuing fiscal accountability then those steps could only be taken at the State level.  Astorino did not plan to run for Governor until he was approached after having won his second term as County Executive. According to O’Reilly, “There is vacuum sucking cash out of Westchester County and around the State. The power plug for that vacuum is in Albany. Albany [hungry as it is] eats up 85 cents of every property tax dollar Westchester County collects. Eighty five cents is pre-spent by the State. The only way to deal with the property tax issue is to be in Albany.” So that answers “How come?”

Now onto “How come now?” And would a Governor Astorino be able to turn tides and make strides in the North Country? The succinct answer given was that changes need to be made now and not in another four years. As to part 2 of the question, Astorino intends to do what he has done in Westchester for the benefit of all New Yorkers across the State. “He has 7 of the 8 unions in Westchester contributing to their own health care programs. In Albany no one has been willing to do things like that. Andrew Cuomo said that he was going to bring mandate relief along with the 2% tax cap. The 2% tax cap came but mandate relief did not. Mandate relief requires tackling union issues and Medicaid expenses and it is clear to Astorino that the Cuomo camp is unwilling to touch these politically sensitive issues.” Astorino intends to use the Governor’s office as a Bully Pulpit, and according to the Merriam-Webster Dictionary that means, “An important public position that allows a person to express beliefs and opinions to many people.”

Astorino’s margin of victory in last November’s County Executive election prompted many people throughout New York State to advise him to run for Governor, according to his campaign communications director. “People see him as somebody who can win in a tough state and also someone who can deal with tough issues. He has spent several months considering the run for Governor and finally decided to do it.” When asked about running against an incumbent Governor with relatively high ratings O’Reilly added that, “The Governor’s likability ratings are relatively high but his job approval ratings are not. That rating is only 42% and it’s the lowest rating of his Governorship. That is because people are looking at the direction of New York State and where it’s going. You have had incumbents that had personal approval ratings of 60% and lost elections.”

When asked to compare Astorino with Cuomo, he said, “Where Rob is different is that he’s willing to tackle politically difficult issues to get New York’s economy going. For example, billions of dollars of new revenue are available to the State with the exploration of natural gas [referred to as fracking]. It would bring in tens of thousands of new jobs and lower our electric costs which are the highest in the country and do so throughout the State. Cuomo has been politically paralyzed from making a decision. It’s been four years and he’s not made one. Rob Astorino knows people are concerned  about the safety of doing this but he cites that both President Obama and the EPA have signed off on it. “You can do natural gas safely in New York and Rob has said that he will bring that revenue into the State. Fracking is being done in 30 states under Democrats and Republicans and is being done safely.”
Looking to the New York State unions and benefits, Astorino believes the approach Cuomo has taken is completely unsustainable.  On the educational front, Astorino will put an end to Common Core. Cuomo, according to O’Reilly, took money from the Federal Government, so now he’s stuck with it. “With Common Core we have something that parents hate. Rob Astorino would replace it with better standards at the local levels of education and their municipalities.”

Political courage will be at the forefront of this upcoming November election. No time to rest in the Empire State, neither for candidates, incumbents nor their constituents. Let’s hope something gives and that residents begin to see glimmers of an Empire State.