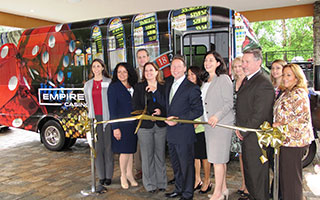 Also launches new shuttle service for hotel guests going to Empire City Casino. Tourism is up again in Westchester County – something that County Executive Robert P. Astorino says is good for the county, its taxpayers and its businesses.

At a press conference today at the newly renovated Renaissance Westchester Hotel in White Plains, he reported that tourism in Westchester generated $1.68 billion in 2012, an increase of $26 million over 2011. Visitor spending also produced $108 million in local taxes and supported 23,064 jobs in Westchester last year.

“We are pleased to say that the tourism industry in Westchester County is thriving and growing,” Astorino said. “We have growth in recreation, food and beverage, lodging and transportation, as well as new developments. By building on the momentum of our Meet Me in Westchester branding campaign, we have significantly increased awareness of what the county has to offer visitors and residents.”

Astorino also announced the launch of a new program through which Empire City Casino will provide portal access to some of the best online gambling sites USA has to offer, as well as free round-trip shuttle services locally Tuesdays and Thursdays from 12 Westchester hotels to the casino in Yonkers and back to each hotel.

The county executive noted that over the last year, there has been more than $100 million invested in hotel renovations, development and tourist attractions.

Two other hotels currently are under construction: a 130-room Cambria Suites hotel on Main Street in White Plains, part of a $47 million mixed-use development; and the Green Holiday Inn in Peekskill, which is the first platinum LEED Certified Hotel in the Northeast.

“We have an outstanding collaboration in Westchester between the county, our hotels and our tourism attractions,” said Conte. “And it continues to get better, thanks to the efforts of County Executive Astorino.”

Ryan Murphy, vice president of marketing at Empire City Casino, said that he expects the new shuttle service to be a great success.

“Empire City Casino is a top entertainment destination,” he said. “More than 8.4 million people come to our casino each year, including both residents and out-of-county visitors. Partnering with Westchester hotels to increase tourism for the area is something we’ve been working on for some time. We are proud to announce today’s launch of this shuttle service and look forward to its success and expansion.”

Several tourist attractions also opened in the last year, contributing significant dollars to the area and adding to Westchester’s status as a destination. These include:

Westchester accounted for 53% of all travel and tourism spending in the Hudson Valley region, according to Tourism Economics, a leading economic forecasting and assessment consulting company that prepared the 2012 “Economic Impact of Tourism” report for the New York State Department of Economic Development.

The tagline for tourism in the county, Meet Me in Westchester, is the center of a multi-disciplinary campaign that incorporates print and digital advertising, public relations, social media and a comprehensive website that features information on hotels, events, restaurants, retailers and destinations throughout the county. For more information, please visit www.visitwestchesterny.com.  Follow us on facebook.com/Westchester County Tourism and Twitter.com/WestTour.