Although the Tappan Zee Bridge disappeared from sight in 2019, the once-reviled, now beloved Hudson River span has never vanished from the public’s imagination.

The outcry from the citizenry after its replacement was branded the Mario M. Cuomo Bridge has kept the Tappan Zee name alive. Calls to rename the new bridge the Tappan Zee have only grown louder since Mario’s son departed in disgrace this past August.

The Tappan Zee Bridge itself, although dismembered and demolished, has continued to mount a cheeky social media campaign using the anonymous Twitter account @oldtzb — whose page contains the description “Hanging out in #bridgeheaven finally.”

Here’s a short Q&A with @oldtzb about its post-commuter life:

Question: The last time we spoke, in January 2019, you had just been blown to pieces. What’s life like in Bridge Heaven? How do you stay busy now that you don’t have 150,000 drivers crawling up and down your spine every day?

Old TZB: Life is great here in Bridge Heaven. The Wi-Fi is free and nobody monitors your internet use. As for staying busy, there are so many baking and dancing contest shows on TV, I don’t even know where to start. I’ll think about that once I’m done watching this next TikTok…

Q: So many people have raised the rallying cry, “Tappan Zee Forever!” Are you comfortable with such idolization and immortality?

Old TZB: I’ve been famous since I was conceived. I’m happy if I made such a good impression on folks that they’d like to not forget me. And I haven’t forgotten that I had my share of detractors in my time. Not as many as Acting Ensign Wesley Crusher had, but enough to make “infamy” a possible descriptor. So, yeah, I’d prefer being remembered fondly, if possible.

Q: Your name and likeness have been emblazoned on a zillion tchotchkes, from T-shirts to refrigerator magnets. Are you collecting any royalties? 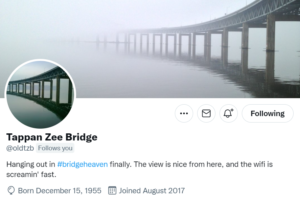 Old TZB: Not a dime. I don’t really need money so I would have donated it to charity, but it is the principle of the thing, isn’t it?  I’ll admit though that it’s kind of fun to see what people can manage to print my picture onto. Except the jogging shorts. Yeah, I did NOT need to see my image plastered on the jogging shorts.

Q: Do you miss those loveable toll collectors, or are you a fan of E-ZPass, which manages to record everyone’s movements but can’t seem to send the bills to the right addresses?

Old TZB: There was this one guy, Peter, who used to bring the most amazing mac & cheese to work for lunch. At least that’s what all the humans said. I think he used truffle oil in it. Maybe he’s a chef now. As for E-ZPass, it’s easier to let the machines do it so humans can spend more time doing what they like, which is moving around so much that nobody can find them.

Q: You’ve come out in favor of renaming the Cuomo Bridge in your honor. No hard feelings over being dumped for a younger, shinier model? Your style was much more understated than this interloper.

Q: if the renaming happens, how would we differentiate the original from the replacement — adding a Roman numeral, like “TZ II”? And would you demand anything in return for naming rights? They spent $4 billion on the new bridge, so it’s not like they’re poor.

Old TZB: Y’all call him what you like; I’m calling him “Junior.” Remuneration? Naw, just put the road signs back and spend the rest of the money on school teachers. Start with geography teachers — nobody on Twitter seems to know where “upstate” starts.

Q: What about a hybrid that includes both the old and new names, as was recently proposed?

Old TZB: I’ve wondered for years why they didn’t just do that in the first place. I’m a bridge; I was built to bring folks together. Although at times I did it more slowly than they would have liked. I’m all for compromise.

Old TZB: May your lanes be free of debris and may your waters be tranquil.

State Assembly Member: ‘Let’s Stop the War Over the Name

Can the controversial name of the new bridge co-exist with the beloved name of the old bridge?

“It’s time that we all came together and reached a compromise,” Abinanti stated in a recent press release. “Let’s stop the war over the name, it’s time to heal.”

Abinanti pointed out that Tappan is the name of a Native American sub-tribe of the Delaware/Lenni Lenape who occupied the area and Zee is Dutch for sea referring to the early Dutch settlers.

Since 2017, when then-Gov. Andrew M. Cuomo prevailed upon the Legislature to name the bridges after his father, many residents have voiced opposition to eliminating the reference to Tappan Zee in the bridge’s name.

Abinanti’s bill was referred to the Assembly’s transportation committee and had not yet been voted on.

A similar bill introduced in 2017 by State Assemblyman Kevin Byrne of Putnam County never made it out of committee, although its corresponding measure was passed in 2018 by the State Senate.

Read the text of the bill here.