If you remember Pac-Man, Cabbage Patch dolls, MTV, Sasson jeans, and who shot J.R. (and can do it without Google), a new trivia book about the “Decade of Decadence” may be right up your street.

Tyrrell, 53, has worked in radio on WNEW-FM, Mix 105, WMXV and The Buzz, and hosts a streaming show called Pop Across the Pond. He has also been an actor appearing in small roles in movies, TV shows, and commercials.

He grew up in the 1980s and said, “I just love the craziness of the time, the music, the fashion, the decade had it all.” Tyrrell adds: “I was busy DJing in clubs in the middle of the night in New York City in places I wasn’t even old enough to be in, I got to experience it firsthand.”

In 2018, Tyrrell released The Name Dropper, a memoir about interviewing and working with celebrities including Jennifer Lopez, Madonna, Celine Dion and George Michael. His 2020 book, The Oliver Factor, was a playful look at some of the most ridiculed characters from popular TV shows. 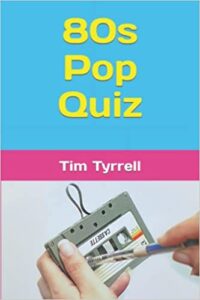 Here’s a few of the trivia questions listed in 80s Pop Quiz, which is available in a softcover print version and electronic download from Amazon: