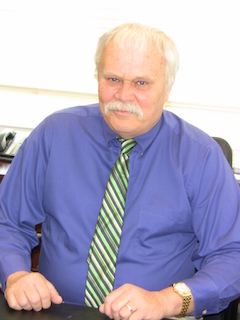 “I was born and raised in Tarrytown and always interested in the Village. At [age] 18, I joined the Volunteer Fire Department and also became very active with the Tarrytown Ambulance Corps. I had a lot of interaction with the Police Department and with a former Chief, – Bob Lipsky. I took the police test, and back in those days the County Department of Corrections was a stepping stone to law enforcement. I worked at the County jail as a Corrections Officer for three or four years, and in 1981 I was hired by Tarrytown,” Chief Brown said during a recent interview.

“I went to the Police Academy for 18 weeks and my first rotation in Tarrytown was from midnight on. I remember my first call. A woman was having chest pains and she happened to live in the building where my grandmother had an apartment,” he said. As a Certified EMT and Police Officer he was able to help the woman and remembers that very first call with clarity.

“How about that. A small town,” he said, with a slight grin.

In 1986 Scott Brown took the promotional exam for Sergeant and passed it. There were officers retiring from the Department and he was promoted to Sergeant that same year. He stayed in the patrol division until 1991 and then took the Lieutenant’s exam and passed it. In 1994 he was made Chief of Police.

When asked what he liked about policing, Chief Brown said, “I like the fact that being a Chief in the town I grew up in and knowing so many people, the Department is in a position to help others through intervention. It’s a little more personal because I know people [whom] I grew up with. When they have problems from marital to health issues or problems with drugs, we’re here to help them. You may not know the person but you may know his brother or someone who lives across the street from him. You can reach out to people much easier when you know them on a personal basis.”

Of interest to this writer is the new wave of people moving into Tarrytown and the many unfamiliar and sometimes detached faces that glaze over, reminiscent of expressions from New York City and the Boroughs. When asked how the PD deals with addressing newcomers, Scott Brown simply said, “There are a lot of people moving into this community who don’t necessarily have experience with police officers and the services that we offer. They are surprised by us.” When asked what he would like the new people in Tarrytown to know about the Police Department, he agreed that many of the new residents do not go out of their way to say hello or interact. “One of the things that we instill in our officers is that if people do not make eye contact then the officer will make eye contact with them. I also would like to see more officers out of their cars and on foot.” Chief Brown is aware that the small town atmosphere and beauty that has drawn so many new residents can be easily lost and replaced by creating a detached, impersonal air to Tarrytown. 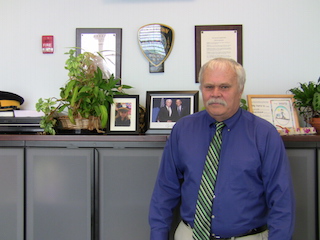 There are 35 police officers on the force in Tarrytown. The number one issue facing them as a crime is – simply put – drugs. “No question about it,” Chief Brown said. Heroin and Oxycodone are at the top of list. Marijuana is not far behind. “A lot of the people we have arrested are young adults, unfortunately, and many of them started with medications found in their medicine cabinets at home,” he added. Most are arrested through traffic stops. The Tarrytown PD is also a member of the Drug and Alcohol Task Force which consists of Villages within the Town of Greenburgh and the Sleepy Hollow PD as well. The Task Force is headquartered at the Tarrytown police station and is extremely active. The officers assigned work solely on drug and alcohol-related issues. “They develop leads and have made some amazing arrests. Not only users but suppliers as well. The men and women of this Task Force are very dedicated and put in a lot of time into their work. There are between 6 to 8 officers in total and Tarrytown has committed one of them. Some are police officers and some are detectives,” he said. He also clarified that this not a crime wave, rather the result of living in Westchester County where there is a lot of money and a lot of use.

One very successful program that the Tarrytown PD has put into action is a “drug drop box” that has been installed in their lobby. Rather than leaving medications lying around at home, residents are encouraged to bring them to the PD and drop them there. Only pills are accepted and no liquids are permitted. Around 30-35 pounds of prescription medications are brought to the station a month. In May of this year, 60 pounds of prescription medications were brought in. “All you have to do is walk in the lobby and drop them in the box. No one asks names or any other questions.” The Police Department also conducts directed patrols for suspected drunk drivers. Alcohol use and driving continues to a problem year after year.

When asked if he had a credo to encapsulate his years as a police officer, Chief Brown said, “That’s a good question. Basically, to lead by example.”  When asked what he intended to do when he retired, he thought about it and then said, “I don’t know. My wife and I enjoy traveling and we have a grandchild who is three and lives locally. She keeps us very busy and we enjoy spending time with her. She is a 3-year-old authority on everything. We have no compelling rush to move.”

For Scott Brown, serving this community has been an honor and a pleasure. By his own account he has been blessed with wonderful officers who know their job and do it very well. Village officials have always supported him and he would like to thank everyone. He also wants the residents of Tarrytown to know that the Police Department is in good hands with the new Chief, John Barbelet. He has all the faith in the world in John and the two believe in many of the same things. The Barbelet family is well known and very well liked in Tarrytown. “John knows the community and he knows what makes it work,” Chief Brown concluded.