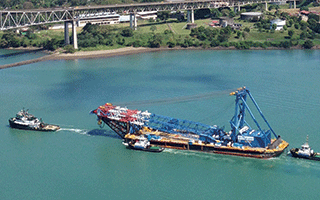 January 18 marked the first full year of the design-build time span to complete the $3.9 billion New NY Bridge. Four years and two months remain. River Journal has followed up on the progress made so far and the anticipated work in 2014, with a question and answer interview.  The following details the responses given by the Tappan Zee Constructors (TZC).

At right, The I Lift NY super crane as it approached the Pacific entrance of the Panama Canal.  A voyage that started in San Fransisco en route to the Hudson River.

Q… Is there a traffic study available for the public regarding the entranceway onto the TZB from Route 9 (Broadway)? The westbound entrance has been closed and is currently reopened. What is its future state with regard to being open or closed while construction for the new bridge continues?

A… Traffic studies have been performed and the contact person is Brian Conybeare, (former News 12 anchor) and special advisor to Governor Cuomo for the New NY Bridge. The ramp will have to be closed again through the construction of the new bridge. There are traffic switches that are upcoming that require that ramp to be closed for safety reasons and the new lanes will shift into that area. TZC will also use the area to store some equipment as the work progresses.

Q… With the first-year anniversary date of the 5-year + 2-month contract agreement approaching, what specific work was completed 2013? What work is underway currently? What work is slated for the remainder of 2014 (with timelines where
appropriate)?

Q… It appears that crafts continuously commute back and forth from the barges to the shore, along with tugboats. Can you tell us specifically what these vessels do and are they doing the same things on the Nyack side of the Hudson as well?

A… Crew boats take workers to and from different activity areas on the River from TZC’s floating dock at our satellite field office in Tarrytown. This goes on continuously through the day and night. Tugboats support different activities, and work to secure barges and move different pieces of equipment through the marine work site as needed.

Q… How many people are currently working on the River itself and what are their specific tasks? We realize there are shifts, however what are the total number of workers on the water (not including support staff in the offices)?

A… Currently, TZC’s craft employees are at approximately 240 and that does not include subcontractors. These craft employees from the local unions provide trestle work, piling/welding, sheet metal fabrication, landing work and additional support activities for the full project, which include equipment operators and dock builders.

Q… Please differentiate from the employees at your location on White Plains Road and those at Hudson Harbor offices with regard to job and daily responsibilities? Also, what is the total manpower number at this time involved with the project?  Both, those on the River and those in the offices?

A… TZC’s headquarters at the White Plains Road office supports the comprehensive project operations and houses the project’s design and construction professionals as well as officials from the New York State Thruway Authority and the Governor’s Outreach Team. The Hudson Harbor Satellite Field Office supports all field operations on both landings and the marine work—most of the construction engineers and project managers are posted at this office. This is where the bulk of the craft employees and the TZC team board our vessels to work in the Hudson.

There are currently 140 TZC employees supporting the project. The craft employees working on the project are noted above.

Q… Have there been any unanticipated problems or issues that you have had to address either in the support capacity or on the River itself?

A… The recent winter weather caused ice to form on the Hudson River. Work was put on hold for a week for safety reasons until temperatures rose and ice cleared for a safe working environment. TZC did build time in the schedule in case icy conditions presented.

Q… Please explain what you would like the readership to know about 2014 and the Bridge construction?

A… The project is currently on budget and on schedule, and already has had a positive impact on the local economy. The Governor announced in 2013 that so far, nearly 600 jobs have been created by the project and 500 businesses, including contractors, consultants and suppliers, have benefited from the project. Of those 500 firms, 220 are located within 60 miles of the project and 70 are within a 15-minute drive. The project is expected to create thousands of jobs during its duration. The public can expect a similar update in 2014 as work construction gears up. The project team has rolled out a Community Benefits Program and you can learn more about it at the New NY Bridge project website at www.newnybridge.com.

The I Lift NY super crane was recently nicknamed as it makes it voyage to the New NY Bridge project site. The crane is owned by TZC and was formerly named the Left Coast Lifter. Visit http://www.newnybridgegallery.com/iliftny.php for more details.

TZC is currently holding monthly business orientations for M/W/DBEs (Minorities/ Women/Disadvantaged Business Enterprise) and interested vendors to further explain how to do business on the project and discuss procurement opportunities. Interested businesses should register on the TZC website to receive monthly updates and to RSVP to the orientations. The TZC website is www.tappanzeeconstructors.com

DBE participation on the project continues to grow, with 46 DBEs performing on the project through December 2013.  This is significant as the total number of firms working on the project site is 109 firms.   The total commitment to date to these DBE firms is $38.6M. DBE is a Federal Certification requirement that requires 10% of funding to be spent on DBE firms.

M/W is a New York State certification requirement. A complete listing of the 46 DBEs providing services will be made available to the public at a later date.