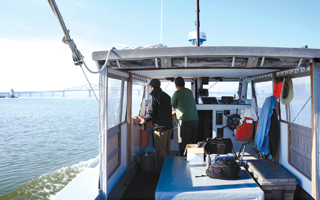 For starters, they are not opposed to progress, and that may come as a surprise to some who believe the environmental group would stop any and all efforts to build a new Tappan Zee Bridge.

This publication has spoken with Riverkeeper’s President Paul Gallay who, several years ago, headed the Westchester Land Trust (which was active in open space acquisition within the Village of Tarrytown). In addition to Mr. Gallay, Tina Posterli the organization’s Press Officer, was very helpful in detailing Riverkeeper’s position vis-à-vis the potential new bridge.[blockquote class=blue]With the latest estimates being a $5.2 billion new bridge that will take 5 years to complete, it is imperative to get the proposal right rather than proceeding with a flawed plan at the outset.[/blockquote]“Our interests are to see the best value for each dollar spent. We realize something needs to be done about the Tappan Zee Bridge. Whether it’s refurbishing the existing Bridge, building a tunnel or a new bridge with a mass transit component. Having said that, we are concerned with public safety and dedicated to the protection of the Hudson River,” Gallay said during a recent interview. Tina Posterli added, “It’s our position that Governor Cuomo is proceeding at break-neck speed to push this new bridge concept forward. We are not against progress or the creation of new jobs. Riverkeeper believes anything done to the Tappan Zee Bridge has to meet transportation needs and not be harmful to the environment of the River.” 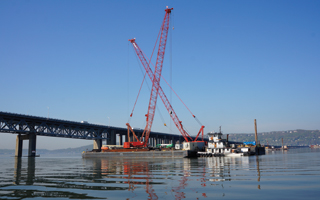 According to both Gallay and Posterli, Governor Cuomo’s approach of building a new bridge without a mass transit component is not a viable or well-thought-out proposal. They cite the high numbers of commuters that travel on the bridge to their final destination in New York City. They also cite climate change sensitivity and lack of mass transit that would adversely affect not only air quality but play into the ongoing concern of a warming globe. Turning to the affect on the Hudson River, both Gallay and Posterli concede that the scale of dredging for any new bridge would endanger river habitat and that the change would be detrimental and excessive. “Under the current proposal, dredging the Hudson will amount to the equivalent of 1600 football fields of the River’s floor.” To date, no adverse environmental impact statements have been issued by New York State although the information is slated for release at the end of July or early August.

Gallay cited a 2009 proposal that would preclude the Governor from “creating the wheel” when it comes to the Tappan Zee Bridge. The first option was to refurbish the current bridge and add a mass transit component to it. The second option was the building of a tunnel and the third was a hybrid version where the current bridge would be refurbished with a second span built for mass transit. “Our position is that people from all interests, including labor, environmental, local, state and federal government, collectively deliver a world class bridge or tunnel. If everyone succeeds together there will be no failure on this project,” Gallay said.

Tina Posterli added, “Pushing forward such a flawed plan that has no funding in place and addresses our environment, the Hudson River and nearby communities as nothing more than afterthoughts, is not what is right for our region, nor is it the example we should set for the rest of the country. We will be living with this decision for generations to come. It’s in everyone’s best interest to take the time necessary to make it a project we all can be proud of.” 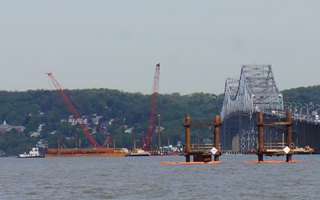 At last report New York State was to sign off on the Final Environmental Impact Statement (FEIS) on Wednesday, July 25. With the FEIS comes a 30-day comment period from the public. Riverkeeper intends to look very closely at the Statement, according to Josh Veleun, a staff attorney and chief investigator. “We filed very extensive comments on the DEIS (Draft Environmental Impact Statement) and when we reviewed it we believed it was legally deficient.  It didn’t adequately analyze alternatives to the bridge proposal that were put forth,” he said. Verleun mirrored what Paul Gallay and Tina Posterli had said, namely, that the State had only one plan on the table and that was simply a new bridge. No mention had been made about refurbishment, a tunnel alternative nor a mass transit component. “What we’re waiting for is to see if our concerns have been addressed in the FEIS,” he noted. Those concerns relate to the dredging impact, the methodology of construction, the disruption of habitat for marine life. If not met, Riverkeeper is prepared to go to court and “put the issue before a judge to make them do a proper environmental analysis.”

In closing, Riverkeeper is not intent on stopping the construction or rehabilitation of the Tappan Zee Bridge, rather they remain focused on the project being done correctly, environmentally and  legally. With the latest estimates being a $5.2 billion new bridge that will take 5 years to complete, it is imperative to get the proposal right rather than proceeding with a flawed plan at the outset.