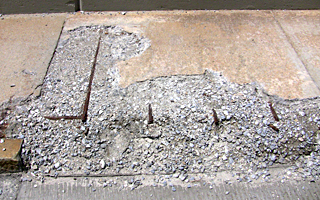 When the New York State Department of Transportation (DOT) inspected all bridges within the State a year ago, Tarrytown’s H Bridge received a red flag for its southwest support column and curbing, according to Village Administrator Michael Blau.

Recently the Board of Trustees approved a $6,000 contract with Experion Design Group (formerly John Myer Consulting) from Tarrytown. Experion will provide design work and construction supervision for the temporary shoring of the column which is located on the riverside of the railroad tracks.

During the years when Paul Janos was Mayor, the former State Senator Nick Spano helped procure two grants for the Village of Tarrytown. One grant was for $500,000 which was a “multi-modal” (various forms of transportation) grant and the other for $250,000 was a “park and ride” grant. The initial thought at that time was that the Village was going to put a deck on the Washington Street parking lot. Nothing besides public hearings on the proposed decking took place. The Village, under the current administration, has revisited both grants which are still available, and has sought to use the monies for H Bridge repairs. Unfortunately, the rules for the specific use of the grants have changed and Tarrytown has tried to “reprogram” the money. At the present time under the direction of the Board of Trustees, Michael Blau is working with the current Senator Andrea Stewart Cousins’ office. “We have asked that the entire $750,000 be reprogrammed for use on the H Bridge,” Blau noted.

The plan is for the column of the bridge to be shored up to make certain there is no issue with its structural integrity. “When we get the money reprogrammed we intend to make a permanent fix on the column, along with the curbs and sidewalks. We have also applied for additional money for work on the bridge,” he added. If the Village was able to perform all the work it would like to do on the bridge the cost would be $1,890,000. Of that figure $850,000 would be for sandblasting and painting the steel on the bridge. “That is more esthetic than anything else,” Blau said. Sidewalk and curb replacement would be $180,000 and that would be done by an independent contractor, since the Village does not have the internal staffing to attempt it. “Obviously in a perfect world we would spend the $1.9 million, but since we are not going to get that amount we are going to start with the items we absolutely have to do, and those are the shoring of the column and the curb replacement,” he said.

At present the Board has not discussed any other additional work on the H Bridge. If they receive $750,000 from the State in the form of reprogrammed grants they intend to do $750,000 worth of work. The Village has already borrowed $85,000 for the sidewalk and has sufficient cash flow to do the work. It will then ask for the reimbursement from the State. Any additional work done over the $750,000 amount (predicated on the State reprogramming the two grants) would cause the Board to borrow the extra money. At this juncture there has been no discussion about any additional borrowing on the part of the Village of Tarrytown.