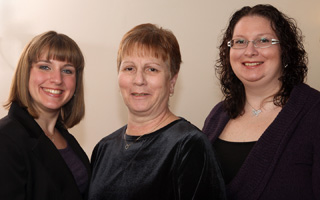 March is approaching quickly, and with it will come Tarrytown’s annual election for its Board of Trustees. The Tarrytown residents running for a place on the Board include many familiar faces and two first-time candidates.

Leading on the Republican ticket is Alison Boldyrev, who ran last year, and will be making her second attempt next month. Joining her on the republican ticket are two first-time candidates—Eleanor and Christine Miscioscia—a mother-daughter duo who have expressed dissatisfaction with the slate of the current Board.

“They’re holding things back from the public and they’re not really working with the public or communicating with them,” says Christine Miscioscia, who’s resumé includes a BA in psychology, and budgeting experience from her work in a medical supply company. The issue of transparency is a recurring theme in the narrative of Tarrytown’s challenging party, as is the concern about what, in their view, is a grossly unbalanced budget.  When referring to projects such as the new Village Hall and the Tarrytown Riverwalk, Boldyrev said, “These things are beautiful. These are things that people like. It’s just that you have to really weigh whether it’s something we can afford right now. We’re 46 million dollars in debt. That’s five million more than we were a year ago. So what’s going on? Why do we keep spending more and more and more? I think it’s something serious that needs to be looked at.”

As always with the issue of spending, indignation is relative to which projects  candidates (and voters) view as necessary, and which they view as frivolous. “We have the Lakes Center, which has been very much neglected,” says Boldyrev, “I feel that’s a beautiful part of Tarrytown that needs to be focused on as well.” The spending debate, according to the two-time candidate, also has much to do with timing. “I think the Village Hall was an important project. The old Village Hall was deteriorating. They were started when things were much better, so I think you have to look at the financial situation as a whole.”  The Pierson Park project is more black and white for the candidate.  “I feel the Pierson Park project is going above and beyond what we can afford … I believe in small government. I believe in taking care of ourselves and really looking closely at what’s needed, what’s wanted, and what we can afford at the time.”

I asked Boldyrev if she would consider opting out of the health benefits offered to trustees in order to reduce the burden on Tarrytown’s taxpayers. A precedent has been set for such a sacrifice in Briarcliff, where trustees routinely opt out of such benefits. One of the incumbent candidates, Robert Hoyt, has also opted out of the package. “I don’t think that’s something that I’m not willing to look into,” said Boldyrev, “but I think more important is how much you pay into the health system…I’m not doing something just to say that I did it. It has to really mean something and drive down the debt.  I’m looking to make a real change in the spending. Of course if [a choice] does that then I’m more than willing to say,  ‘Hey I pay for my health insurance now, I’ll pay for it later.’ It’s  about what makes a real difference and not just a smoke screen.”

In the interests of closer examination of the first-time candidates’ principles, I asked the Miscioscias to assess projects funded by the current Board and to say whether they were projects worth spending money on. I asked them specifically to address two projects over which the incumbent trustees have expressed a strong sense accomplishment. As it turns out, the new Village Hall and the upgrade of Tarrytown’s water system are projects that the candidates view as “necessary,” though Christine Miscioscia thinks the new Village Hall could have been “scaled down a bit” and Eleanor Miscioscia says that Tarrytown wouldn’t have to spend so much on fixing infrastructure problems if the Board was more diligent about upkeep. “I know the infrastructure is old. My sewer line broke about ten years ago to the tune of fifty thousand dollars … but you have to do preventive medicine to keep things going. You can’t wait for everything to break and then try to fix it all. They’re not looking at things reasonably.”

Another big issue for the upcoming election will be the construction of the new Tappan Zee Bridge. Boldyrev says the project is “definitely on the fast track,” but opponents are concerned about what they view as complacency on the part of current Board members.  “I think Tarrytown needs to jump in and start being vocal with the County and the State and

Federal government. We’re the ones that are affected and we need to be compensated… the Village trustees are supposed to be our representatives for the State and County, and I don’t see that. I hear silence.” When I asked her to elaborate on her concerns about compensation she said, “How is the Village being compensated for the disruption that’s going be taking place for a minimum of five years? Because if they’re saying it’s a projected five-year project, I mean, with construction there’s never a project that goes through in a timely manner. So minimally, for five years we’re going to be affected by construction crews, noise by the waterfront, and environmental impacts, so that needs to be told to Albany. What are we getting out of this as a Village?”

I asked the Democratic incumbent candidates, all of whom originally agreed to interviews via email, where they stand on the issue of the Tappan Zee Bridge. I also asked them a question about what they would do to drive down the debt, along with those standard incumbent-oriented questions about their greatest accomplishment and regret. ©

There are a total of 17 candidates running for Trustee seats in 4 Villages. 14 candidates running for the office of Trustee in Irvington, Tarrytown, Sleepy Hollow and Briarcliff Manor were interviewed by the editorial staff at River Journal. 3 candidates, Thomas Basher, Mary McGee and Robert Hoyt (incumbent Democratic Trustees in Tarrytown) initially agreed to interviews. However, 2 later declined (Basher and McGee) referring us to their printed campaign literature, and the 3rd (Hoyt) never responded by the time of this writing.