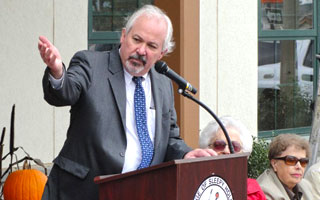 On March 17, Sleepy Hollow Mayor Ken Wray was re-elected to his fourth term by a 2-to-1 margin over his opponent. With the chaos of the election behind him, he is now free to focus on his vision for the future of the Village.
It is an interesting time for Sleepy Hollow, and the most public issue on Wray’s plate is also the largest, most long-term, and most important – the upcoming development of Lighthouse Landing.

“We want to make sure it’s properly integrated with the Village,” he says. “We want to ensure the Planning Board has the technical expertise that it needs and that the project moves forward in a way that is least disruptive to Village residents.”
In an early Christmas gift to the Village, New Jersey-based Diversified Realty and California-based SunCal were announced as co-developers of Lighthouse Landing. Now, however, it’s time to face the hard truth of what Wray guesses could be seven or eight years of construction. To do that, Wray hopes to bring new voices to the Planning Board with the wide range of skills that will be needed to see this project through. “The kind of expertise we need [on the Planning Board] is different from what they normally would need. We will need to ensure we have the proper environmental expertise available… we need to make sure the Planning Board has appropriate engineering expertise. We can’t expect the Village building department or the Board members to have that kind of expertise on their own,” he says. “This is a huge construction project… There’s going to be an enormous amount of work going on. We want to make sure that it is mitigated as much as possible for Village residents.”
“We’ll see the beginnings of the materials that they’re going to need being moved into the site first,” he says. “Specifically, there are 250,000 yards of fill that they have to bring in. To give you an idea, a yard is roughly the amount of material you can put in the back of a full-sized pickup. They’ll start bringing that in this year. That will be the first activity that anybody will really see.” That’s an enormous amount of fill to haul, and due to the fact that Lighthouse Landing currently has but one outlet to Route 9 and the larger roads, all that fill will, by necessity, initially travel down Beekman Avenue. In the longer term, however, there is hope for some of the materials and equipment to come in by rail.
While certainly not as large as Lighthouse Landing, the project to build a new water tank for the Village is just as important, and Wray expects movement on it any day. “We’ve sent our request for approval off to the [New York State] Department of Health. We need their approval before we can move forward, and we expect to have it in a couple of weeks,” he says. “We will then go out to bid, and we will award the bid probably by early summer. The project will take about four months to build, and we expect that it will actually be finished around November. We’ll probably fill [the water tank] up in the early spring because there’s a coating you put on the inside of the tank and you want to let it cure properly so you don’t have to redo it in ten years.”
Getting these two projects off and running will finally allow Wray to address another issue he’s long wanted to undertake. “I want to begin a comprehensive [strategic] plan for the Village, something that was impossible until now,” he says. “We had to know whom we would be working with at Lighthouse Landing and we had to ensure we had a long-term water supply. Now that we know both of those things and also that both of them are under way, we’re in a position where we can go forward with a comprehensive plan.”
Wray says he’s not looking for a simple, off-the-shelf plan for the Village. Rather, he says it will need to include elements that are not typically part of a strategic plan. “It should include a look at affordable housing and economic justice, as well as how the arts are part of the Village,” he says. “We’re an immigrant Village, proud of our history, but we have to be aware of and plan for the effects of gentrification.” He says the plan will concentrate on the downtown area of Sleepy Hollow and include mapping and prioritizing the Village’s infrastructure needs such as roads and parks.
He’d also like to look for ways to more prominently feature local artists. “There are a number of groups that are evolving in the Village,” he says.