Over 100 runners took part in the inaugural Pocantico Hills Marathon on November 13. Starting and finishing in the Rockwood Hall section of Rockefeller State Park Preserve, runners covered 26.2 challenging miles of rolling hills with an overall elevation gain of 2,500 feet. Cool temperatures and sunny skies provided ideal running conditions for the majority of the race,  while a passing storm rolled through at the end.

“The runners were uniformly pleased with the race, the course and the way it was marked, and with the volunteers,” noted race organizer Charlie Gadol

Proceeds from the race will be split between Friends of the Rockefeller State Park Preserve and the New York New Jersey Trail Conference.

For more information on FRSPP or how you can support its ongoing efforts, please visit www.friendsrock.org. 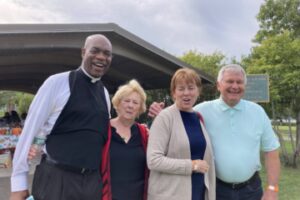 Looking to a Bright Future with Father Tim