One-hundred years ago, a decade before Gloria Steinem was born and 40 years before Betty Friedan identified “the problem that has no name,” American newspaper columnist Elsie Robinson pushed readers to rethink gender inequality. “I’m tired of hearing the differences of men and women emphasized and exploited,” she wrote in 1922. “It has built a wicked wall between the sexes and it’s time we knocked it down.”

A writer who used her national platform to defy social mores, Robinson’s “Listen, World!” column reached more than 20 million readers, making her one of the most well-known people in the country. But she’s been largely forgotten.

Born in the Victorian era to a poor family in Benicia, California, Robinson was expected to want nothing more than a husband and children. But she dreamed of a different life—one as a professional writer. At 35, desperately poor following a bitter divorce that made her the sole caretaker of her chronically ill son, she became the lone female mucker in a California gold mine, and spent her evenings typing up short stories and essays as she tried to break into the publishing industry.

Her hard work paid off. In 1924, media powerhouse William Randolph Hearst hired Robinson and made her the highest-paid woman writer in his company. For more than 30 years, Robinson shared her blistering and unapologetic opinions in support of women’s rights and immigrants; deriding capital punishment, racism, and anti-Semitism; and urging women to realize bigger, more fulfilling lives. She made history by being one of the first columnists in the country to also draw her own accompanying editorial cartoons. 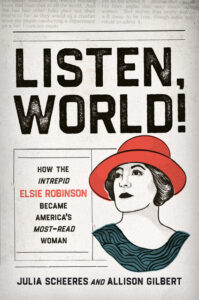 In Listen, World! How the Intrepid Elsie Robinson Became America’s Most-Read Woman, Scheeres and Gilbert seek to rescue this heroine from obscurity, shining a light on her remarkable body of work and the heartbreaking paths she took to become one of the most prominent writers in America.

“Listen, World! is the rarest of things — a lively piece of unknown history, a marvelous story of a woman’s triumph, and a tremendous read.” ―Susan Orlean, bestselling author of The Library Book

“Memoirist Scheeres and journalist Gilbert deliver a page-turning biography of Elsie Robinson…The account is enlivened with copious excerpts from Robinson’s column and her memoir, all of which bring home her firebrand style. This entertaining account delivers.”  ―Publishers Weekly

“A riveting story about a woman who had nerve.” ― Jill Abramson, former executive editor of the New York Times and author of Merchants of Truth

To buy Listen, World! visit indiebound.org/book/9781541674356 to find independent booksellers in our area.