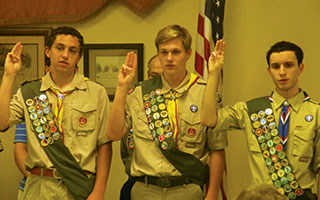 On Wednesday, August 13, at the Briarcliff Manor Fire Department, three high school graduates and residents of Briarcliff Manor proudly accepted their induction into the hallowed ranks of the prestigious Eagle Scouts, the highest honor in the Boy Scouts.  Ethan Krupa, Michael Feist and Emmett Morrissy stood in front of their proud parents, family, friends and community members, at the 2014 Summer Eagle Court of Honor, Troop 18 Briarcliff Manor to accept their badges.

Scoutmaster Robert Goldstein outlined the obligations of an Eagle, and Assistant Scoutmaster, Scott Ryan led the scout oath. Assistant Scout Master Joe Lalak and Advancement Chair, Nancy Curatola presented the badges. Each one of the three scouts gave speeches about their experiences in scouting.

[blockquote class=blue]These young men are truly exceptional and deserve all the honor and life-time benefit, of being an Eagle Scout.[/blockquote]All three boys started as Cub Scouts together in Den 8, Pack 6.  There they earned their Arrow of Light before joining Troop 18.  They shared many adventures and challenges together which included wilderness survival, zip lining through Boy Scout camp, and Klondike derbies.  Joining Joe Pennachio, half of Den 8 has earned the rank of Eagle Scout. 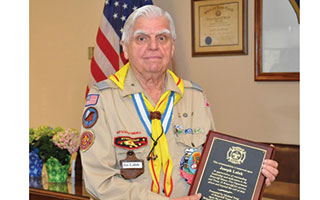 Scouting has historically been an important part of the Briarcliff Community.  Cesare DeRose, Jr. became an Eagle Scout in Briarcliff in 1999.  He is currently the manager of Tools for  Better Living in Briarcliff and owns Tegra Direct Building Supply Company. He is also an associate member of the Briarcliff Fire Department: Ladder 40 and is on the Board of the People’s Caucus in Briarcliff Manor.  Cesare and his high school sweetheart, now his wife, Cari, both graduated from Briarcliff High School and live in the Village. They are currently expecting their second child. Cesare goes every year to the Gathering of the Eagles. “You can’t believe how many people who attend the Gathering are so successful. There are justices and executives and people who are at the top of their professions.  “You just don’t realize the impact of being an Eagle Scout right away.” DeRose describes how the challenges of becoming an Eagle Scout prepare you to be a leader and for coping with difficulties that occur in life. “You realize that you can do something you just felt was impossible,” he says.  If you have the experience of doubt and fear and then the experience of overcoming that, it stays with you for a lifetime. “It teaches you how to make good choices and how to be self-motivated.” DeRose helps out the Village’s Eagle Scouts with construction supplies and instruction if wanted.  He was the flag presenter at the Court of Honor where he handed the flag to Ethan Krupa.

Ethan joined Cub Scouts in first grade, but his biggest challenge came when he had to juggle his high school schedule as well as come up with an idea for his Eagle Project and then following though with it.  Between SATs, sports, college applications, as well as keeping up his A average, it could be called impossible.  Ethan has a family tradition of Eagle Scouts. His father, two uncles, brother and two cousins are Eagle Scouts. With the encouragement and support of his family, Ethan was able to do the impossible. He built an information kiosk providing maps, scorecards, and information for the Frisbee Golf Course at Leonard Park in Mt. Kisco making the course’s existence more evident to the Frisbee Golf enthusiasts.

Ethan is attending Duquesne University in Pittsburgh to pursue a degree in physical therapy.

Michael Feist has been very active in scouting.  He was senior patrol leader in Troop 18 and the Troop representative for the Order of the Arrow (the Scout  Honor Society).   He attended the Westchester/Putnam Read Scout Reservation since 2003.  His Eagle project involved hosting and preparing a brunch honoring the Briarcliff Manor Fire Department and EMS staff.  60 people attended the event, held on March 23, 2014, at the main firehouse in Briarcliff Manor.  The menu included filet mignon, maple glazed ham, spinach crepes in a Parmesan cream sauce and many other delicious  dishes.  Mike is a member of the National Technical Honor Society in Culinary Arts.  He is also a food stylist and photographer.  Mike’s project was supported by many of Briarcliff’s merchants and he received over 50 donations of food, materials, and money.  Mike then went on to publish an event journal that includes the history of the 113-year-old fire department.   He also presented a plaque to the fire department and paid a special tribute to Joseph Lalak.  A long time resident of Briarcliff Manor, Joe is a retired research engineer for Philips Laboratory in Briarcliff and has been a volunteer leader in the Boy Scouts for the past 37 years, a 43-year active member of the Fire Department and former captain of the Hook and Ladder Company. He also runs the monthly Explorer Post drills. Mike will be attending The Culinary Institute of America at their Napa Valley campus to study nutrition and culinary arts.

Emmett Morrissy is a resident of Briarcliff Manor who just graduated from Fordham Prep School.  He has been a member of the scouting community for the past 11 years.  He attended Camp Read for 5 summers earning 23 merit badges and served as Troop Scribe, Patrol Leader and Chaplain.  Emmett was a member of the Fordham Prep crew team. His high school honors include National Honor Society, AP Scholar, Chinese Honor Society, Fordham Distinguished Academic Achievement Award, and Fordham’s Citation of Honor for service and Principal Honor Award.  Emmett chose as his Eagle Scout project to restore the badly damaged gardens and flower beds at the Ossining Children’s Center which had been destroyed by Hurricane Sandy.  Emmett’s grandparents had been involved with supporting the Children’s Center for many years.  With the help of 30 volunteers from troop 18 and other volunteers from the community, the old flowerbeds were removed and 20 new and improved raised flower beds were built just in time for this past spring season. Emmett will be attending Northwestern University in Chicago this fall.

Only 7% of all Boy Scouts earned their Eagle Scout badge in 2013. In order to achieve this you must pass through all the ranks: tenderfoot, second class, first class, star, life, and eagle. You must earn 21 merit badges, serve 6 months in troop leadership roles, plan, develop and provide leadership for a service project for any religious organization, or school or community, take part in a Scoutmaster Conference and successfully complete an Eagle Scout Board of Review.  These are all difficult and time-consuming, especially in a world that puts so much pressure on teenagers.  These young men are truly exceptional and deserve all the honor and life-time benefit, of being an Eagle Scout.