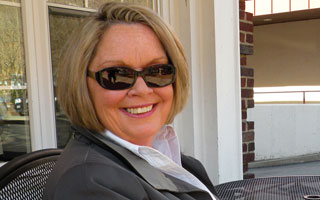 Newly elected Briarcliff Manor Mayor Lori Sullivan doesn’t know exactly what she’s gotten herself into, but she has a pretty good idea. Having served as Deputy Mayor for Mayor Bill Vescio and on the Board of Trustees for 6 years, Mayor Sullivan is experienced in Briarcliff’s team implementation. “Briarcliff is run by its residents. There are no political agendas or special interests unlike in some other communities,” says Sullivan.  She notes that there are many committees in Briarcliff, several of which she has been a part of, that are made up of residents who bring a variety of expertise and viewpoints that round out the decision-making process.

Mayor Sullivan brings her own unique set of qualifications to the job.  Her friendly and down-to-earth manner suggests a personality well suited to implement her plans to be an approachable Mayor who will gladly sit down for a chat with residents over a cup of coffee.
She grew up in Yonkers and attended Annunciation Grammar School, Ursuline High School in New Rochelle and Stonehill College.  After college she became a paralegal where she worked in the medical malpractice field before going back to school at Pace Law School.  She has been practicing law since 1988 and has been in private practice since 1989. In 2002 she went into business on her own after having worked with a partner, and currently specializes in general civil practice, 50-60% of which deals with matrimonial issues. Sullivan has been married to her husband, Peter Francese, for twenty-seven years and has one daughter, Kristen, who is graduating this spring from Tulane.  Kristen plans on attending Pace Law School like her mother.
Mayor Sullivan has been living in Briarcliff Manor since 1998 and gets animated when discussing the great decision they made to live in the area of town known as “The Tree Streets.”   “My sister Kerry and her husband, Mark Pohar, live nearby. It is a wonderful neighborhood to raise children in.”  Her decision to get involved with local government started with an initial and unsuccessful bid for the position of town judge many years back. Despite the fact that she didn’t win, she was hooked on being involved in the Village and meeting new people.  She began to serve on committees, ultimately ending up on the Ethics Committee, which she really enjoyed.
Sullivan acknowledges her predecessor, Bill Vescio, who was instrumental in steering Briarcliff Manor towards having well-grounded financial stability, and it is a priority for her to maintain a philosophy of financial prudence during her tenure. “That being said,” says Sullivan, “there continues to be a need to evaluate and address infrastructure issues and I will strive to continue to keep finding sources of revenue from outside to help fund various projects each year.  We are eligible for various grants because of our credit rating and because our needs meet certain criteria.”  Sullivan says she will investigate any and all opportunities for funding with “eyes wide open.”
What currently bothers her most is the Village’s inability to get funding for the Scarborough Park Project.  Despite the plans being already drawn up, the small size of the project appears to have prevented it from being a priority as far as funding goes.
Some of the other projects that lie ahead for Briarcliff Manor include the old Rec center building on Macy Road, which will be coming down (It’s coming down on its own currently.) and will be replaced with a comfort station and (hopefully) refurbished fields. The Recreation department is a big draw for people who move to Briarcliff and Sullivan feels that assuring the vitality of the recreation facilities is a priority.  The Youth Center also needs an overhaul with perhaps some more basketball courts.
With the opening of the new Community Center, Law Park will be a dynamic public space “almost like the town ‘Country Club’ with the pool, courts, events and classes which will be integrated with the library.”  Sullivan sees there being even closer interplay between the library and the recreation department.
Sullivan doesn’t feel the need to micromanage the day-to-day town business, as she feels that Phil Zegarelli, the Village Manager, is doing a terrific job at that. She plans to oversee much of what is going on in the Village with the help of new iPads that the Board has purchased which will allow for faster communication amongst town officials.
In order to further facilitate communication with Village residents, Mayor Sullivan is looking into setting up Saturday morning office hours to meet with whomever would like to stop by and
chat. “Every resident’s voice matters.” Communicating with each other will be “how we chart our future in Briarcliff.”  In the meantime you can leave a message for her at the Village Hall and she will return your call.
Mayor Sullivan looks to the community for support in her new job by beseeching people to volunteer for committees and getting involved, especially those with school-age children, even though she knows how busy everyone is.  “The Village needs a variety of ideas in order to keep moving forward. It’s not as much of a time commitment as you might think and we really need you. It’s a great way to meet new people.”